I will ill on the feast of Candlemas, and I am only just now taking down our Christmas cards, which we have enjoyed over the long Christmas season. The cost of postage seems to be gradually driving them out of fashion, but I think it is a good custom and I would be sad not to receive any.

In a post-Christmas spirit, I thought I'd post up the results of a little informal competition among the cards we received this year, which were as always an interesting selection, and included for the first time cards sold in aid of the Latin Mass Society.

The card above, was in my view the best traditional Christmas image. The prize goes to Aid to the Church in Need, which has long had an excellent selection. Their nearest rival among the cards we've been receiving over the years - at least, till the Latin Mass Society got in on the act - is SPUC, which didn't have such a good year I thought.

This below is what I thought was the least unacceptable secular image. Most secular cards go straight into the bin in my house, to keep the ugly religious ones company. (Zero tolerance for mawkish and otherwise bad art!) The boys are not University students, incidentally, but the pupils of William Shakespear's grammar school in Stratford, and the card seems to have been sold in this institution's support.

Below is the most reiterated theme (excluding the Nativity itself of course). We received no fewer than four different cards showing a partridge in a pear tree. I think this one is charming.

The prize for the most obscure religious subject goes to Madeleine Beard, who like many artists uses her own very distinctive art for her cards. This rather fun image is of Our Lady of Pontmain. Let us hope Our Lady will have similar pity on the Church today that she had on France in January 1871. 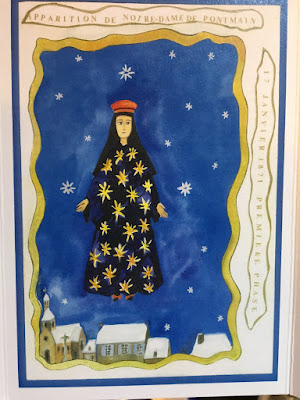 The next one, by contrast, gets the wooden spoon for most badly-printed commercial card. The colours are garish and the images pixillated, and it comes from the Museum Selection, which seems to have gone downhill.


This is the most outrageously religious card from a totally non-religious institution: in this case, a financial institution in the City of London. Cards to customers of commercial enterprises can be perfuctory, but in this case I shall be happy to continue to patronise them in 2017.


Finally, I thought this was the best card from a religious Institute. I received lovely cards from the Institute of Christ the King, the Fraternity of St Peter, and the Sons of the Most Holy Redeemer, but I liked best of all this year this large and handsome image of St Norbert receiving the Habit from Our Lady, and the Rule from St Augustine: from the Norbertines of Chelmsford. 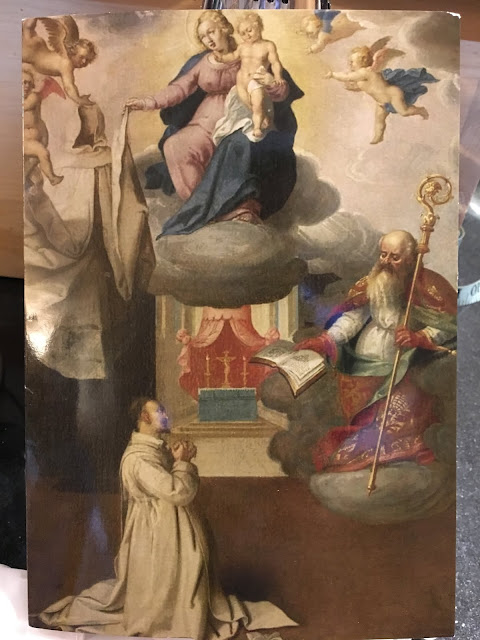 May all our friends flourish this year!

And for those who still haven't taken down their decorations, take comfort from this. I read in an old book about decorating churches, that in the records of one Medieval English church the custom was to take the Christmas greenery down... on the First Sunday of Lent.

So you have a little time.