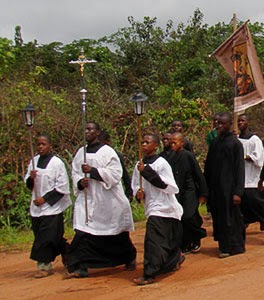 
Wrong. The reality is that, unfortunatly, the Novus Ordo looks very much like the other aspects of modern European culture which have been arriving in Africa since colonial times, which are not respectful of authentic African culture. Alongside Holywood films and consumerism, the Novus Ordo reflects the passage through European thinking of Rationalism and Romanticism. Insofar as one can see it as a good response to the cultural situation of modern Europe - and this is presumably the idea - then its attempt to make Catholicism less shocking and uncomfortable for people who don't understand the concept of the supernatural and instinctively reject the idea of tradition, it is addressing a situation totally removed from the situation in Africa. For most African Catholics, it is an answer to a question which is not being asked.

Back in 1970, with hindsight, the Novus Ordo was imposed on a Catholic population in Africa with very limited exposure to the European ideas to which the liturgical reform was responding. Perhaps - the progressives will say - the situation is different now, now that many Africans have mobile phones. And in any case, the great advantage of the Novus Ordo is its great flexibility, which facilitates inculturation.

Well, how are Africans, in a religious context, responding to the new conditions, and how does the Novus Ordo and the TLM fit in with this response? One of the things we have learnt - or should have learnt - from the revival of Islam is that lightbulbs and cars and even Western-style universities do not necessarily blunt the appeal of traditional spirituality. In Africa, in fact, we find two different responses: the embracing of the new, of European and American influences, and a reaction against them.

In the first case we find (as well as simple materialism) Evangelical groups which reject everything African, and embrace a spirituality based as closely as possible on American models. This is the opposite of inculturation; it is the apotheosis of the foreign as superior to everything African.

In the second case we find the traditional religions, syncretistic cults, and the problem of 'dual allegiance': nominal Catholics who consult the practictioners of traditional religions, voodoo and the like, when they feel like it. The feeling here is that the old African way is superior, more powerful, and more deeply rooted.

The infinite flexibility of the Novus Ordo is not necessarily an advantage in this situation. The Church is being attacked from two, opposite, directions: by Evangelicals, for making too much concession to paganism; by syncretists as not being sufficiently magical or deep. The variety of liturgical forms found in Catholic churches can easily give the impression the the Church does not have anything coherent to say in this debate, and has no effective defence against either side.

What the Church needs, in fact, is a form of worship which is clearly not pagan, but which still answers the spiritual needs of people who feel the pull of paganism. A liturgy which creates a sense of the sacred, of entering into the mysterium tremendum. What can too easily happen is just the opposite: a 'banal on-the-spot-product' (as Pope Benedict described it) with pagan ceremonies inserted into it at intervals, as we have all seen with Papal liturgies. African Catholics could be forgiven for thinking, in a liturgy like that, that it is the pagan stuff which is powerful, which connects with the transcendant, with the spirit world, and not the Christian stuff. That, obviously, is a disaster, even leaving aside the whole question of liturgical abuses.

What I would like to emphasise finally is that, however narrow-minded some of the missionary priests of old might have been (and by no means all of them were narrow-minded), having a totally Catholic but spiritually impressive liturgy like the Traditional Mass can today give priests and people the confidence to incorporate African customs into the life of the Church, without exposing themselves to the polemics of the Evangelicals or to any kind of syncretism. It is a great sadness that Africans should feel they have the abandon their indiginous names, music, or art, in order to become Christian: this is something Pope Paul VI spoke firmly against in 1967: 'an African man, when initiated into the Christian religion, is by no means forced to repudiate himself'. Cultural self-repudiation has never been the Church's demand of converts. The Traditional Mass is not part of the problem with inculturation, but part of the solution.

Support the work of the LMS by becoming an 'Anniversary Supporter'.
Posted by Joseph Shaw at 11:00 am