Does Tradition preserve us, or we the Tradition?

There is a striking moment in Francis Poulenc's great Catholic opera, Dialogues des Carmelites. The young protagonist, Blanche, suffers from extreme timidity and wants to join a convent. She has an interview with the tough old Prioress, who ask her why she wants to join. She is seeking, she says, 'refuge'.

The Rule is not a refuge. It is not the rule which guards us, my daughter, but we who guard the Rule.

There is a little wordplay here: 'garde' means 'guard' and simply 'keep': we keep the Rule, in the ordinary sense of following it. But of course in keeping the Rule of religious life they by the same act maintain it, preserve it, guard it.

A rule of religious life, for those in it, is a burden which must be taken up every single day. Every morning you must get out of bed, often at some absurd time in the morning, to follow the Rule, and spend the day keeping its prescriptions on food, prayer, and work, in an endless round. It hems you in; it limits what can do; and if you get slack, if your vigilance wavers, then the regular life, the life of the rule, crumbles around you.

It is the same with the Church's Tradition. I don't mean the Deposit of Faith, but the living Tradition which informs the Christian life. We guard it, we keep it, in the simple sense of we keep it up. It exists as a living Tradition because it is kept, observed. It does not keep us: we keep it. If we stopped bothering, then we would fall outside it; too many people become slack, it will decay; if everyone gives up on it, it will cease to exist.

Aspects of this Tradition are bound up so closely with the Faith and the very existence of the Church, that they are covered by Our Lord's guarantee of the Indefectability of the Church. The rest is not. Important components of Tradition can be lost, and some have been.

It is uncharactistic of Gerard Manley Hopkins to get something so central to the Christian life completely and sentimentally wrong, but he does, in his poem about a woman taking the veil:

And I have asked to be

If that's what she wanted, she must have been disappointed. The religious life is not for the faint-hearted; it is a field of spiritual combat, not a retirement home. The religious life, in this respect, is an intensified version of the Christian life in general. Ronald Knox put it well; talking about an old soldier who had become a Catholic, who was asked if he had found peace, he reported the response: 'Peace? I have found war!'.

War: but not in a bad way. If you are wondering what the point of the obligations of the religious vocation might be, or what benefit is offered us by a Tradition which makes so many demands upon us, it is that they marshal us in the army of Christ, in the fearful battle with principalities and powers. They encapsulate the practical wisdom of our predecessors in the Faith, the Fathers, Doctors, Holy Founders and spiritual masters of the past, who, precisely because they are in the past, are not infected with the errors of today. The rules, the habits and practices, give us structure, discipline, and coordination; they keep us away from harmful influences, and they feed us with wholesome spiritual food. To relinquish them is to go naked into battle with Satan, without weapons of attack, armour of defence, or training in combat. 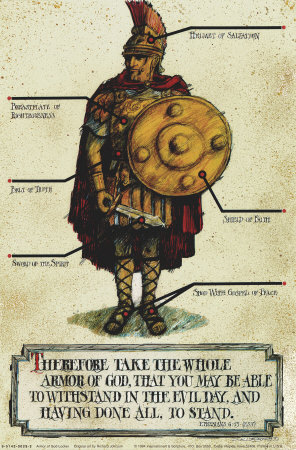 You may not want war, but the war will find you. This being so, the Church is of course the safest place to be, but not because you can sleep folded in her arms, but because she will make you strong.

It is a simple point, really, that Catholics attached to the Tradition want to make. Not that salvation is impossible without the Brown Scapular or birettas, but that to reject great swathes of the Church's Tradition, and above all the Traditional liturgy, is to attempt to live without a whole lot of things which are of huge help in the Christian life. Taken in the abstract, they will no more protect you than a copy of the army manual of discipline and tactics will protect you against a hail of bullets. It is the army which must keep the principles of such manuals alive, not the other way round. Just don't expect an army without discipline or tactics to withstand the enemy's attack.

Catholics who think they, and the Church in general, can do without the Traditional Mass are both right and wrong. It is not absolutely necessary to an individual's salvation. But to cast its help aside at this moment of crisis is hubristic in the extreme.