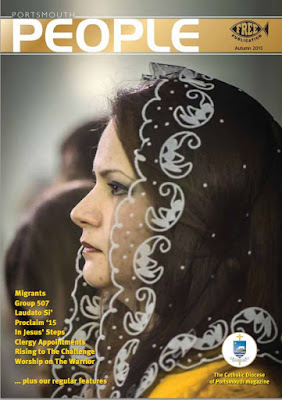 The new edition of the Portsmouth diocesan periodical, the Portsmouth People, has a lady in a mantilla on its front cover. On examinining the photo credits, it appears that she is attending Mass in Erbil, Iraq. It is linked to a story about refugees.

The Catholics of the Middle East have been more faithful to their traditions that the Catholics in the comfortable West. But those attached to the Traditional Mass are doing their best.

See the Position Paper about headcoverings at Mass here, an introduction to its arguments here, and a discussion of the shared custom of headcoverings with Islam here.

Here's a quotation from the General Instruction of the Roman Missal, itself quoted by Pope Benedict in the motu proprio Summorum Pontificum.

As from time immemorial, so too in the future, it is necessary to maintain the principle that “each particular Church must be in accord with the universal Church not only regarding the doctrine of the faith and sacramental signs, but also as to the usages universally received from apostolic and unbroken tradition.  These are to be observed not only so that errors may be avoided, but also that the faith may be handed on in its integrity, since the Church’s rule of prayer (lex orandi)corresponds to her rule of faith (lex credendi).


The customs of women covering their heads, and until recently far more burdonsomely, of men uncovering their heads, is not just of Apostolic tradition, it is actually commanded forecfully in Scripture (1 Cor 11:3-4, 6). To say that it is unfortunate that we don't follow this tradition more widely today is an understatment.

Support the work of the LMS by becoming an 'Anniversary Supporter'.
Posted by Joseph Shaw at 1:03 pm