Was Constantine the Great a Clericalist? 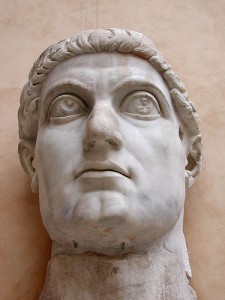 It is an obvious point, but if you have a world view which requires you to assert things which are clearly absurd, then you have a problem with your world view. I've been reading Russell Shaw's 1993 book about clericalism, To Hunt, To Shoot, To Entertain, and this point has been borne in on me with great force.

Russell Shaw (RS) is an American neo-conservative Catholic. The importance of the 'neo' is considerable. A quick characterisation of neo-cons might be that they defend the teaching of the Church without being concerned about the ancient liturgy; perhaps that is how they see themselves. But as this small volume demonstrates, they have adopted so many of the premises of the liberals that their positions would be totally unrecognisable to orthodox Catholics of any time up to about 1970. In the case of RS' characterisation of clericalism (I'm interested in his book because I agree with him that it is a historical and contemporary problem), his analysis is distorted by two fundamental liberal claims: first, that the Church must be 'separated' from the state in an American sense; and second, that the liturgy glimpsed in the earliest surviving sources, and extrapolated from archaeological traces of the earliest surviving churches, wrongfully excluded the Faithful from meaningful participation, and went on doing so until the Novus Ordo Missae was promulgated in 1969.


If you accept these claims, then you must reject the practice, and a huge amount of the teaching, of the Church from the time of Constantine the Great until Vatican II, on the most intimate internal spiritual matters, of the liturgy, and equally on the most public and social matters, of the Church's place in and influence on society. But obviously you can't be a 'conservative' in any meaningful sense if you think the Church was fundamentally misguided in this way for almost all of her history; we have to use another term, 'neo-conservative', not as an insult but simply to describe what is going on.

Up to the time of Constantine the Great, the Roman emperor who make Christianity the state religion, the Church's lay leadership was fairly undeveloped, and because of the periodic persecution it could not have much public manifestation. That's not to criticise the Church, it's just a fact. When Constantine came onto the scene, the Church acquired a lay leadership of such weight that it immediately faced the problem of 'caesaropapism': of lay control of the Church. Clericalism is the suppression of lay authority and autonomy in the domestic and temporal sphere proper to the laity; caesaropapism is the suppression of the authority and autonomy of the clergy, and especially the hierarchy, it its proper sphere: the spiritual and dogmatic.

The Church in the West, and the Papacy, were on occasion overwhelmed by lay domination, but never gave up the fight for clerical authority, and during the centuries which followed Constantine the pendulum swung one way and then another. What we see, however, in the calmer moments in practice, and in the less calm moments asserted at least as theory, is the principle that both the clergy and the laity do have their proper spheres within the Church, and it is this which is the only solution to the problem of clericalism: the solution taught, but obviously not invented, by Vatican II.

Russell Shaw is determined, however, not to see caesaropapism as the antithesis of clericalism, and eras of caesaropapism as eras in which the Church was far from suffering from clericalism. He has a number of arguments to support this view. He says that Constantine saw himself as in some sense the head of the hierarchy, a sort of bishop: maybe, but if so this is the epitome of lay control of the hierarchy, not the other way around. He goes on to point out that it was from Constantine's time the clergy began to have a specialised training, gained exemption from military service and certain taxes, and began to wear distinctive dress. True, but this isn't anything to do with clericalism, merely the distinction between the clergy and the laity, which as RS concedes derives from Christ's institution of the sacrament of Holy Orders.

Then there is the matter of the liturgy being celebrated at an altar distant from the Faithful in those great basilicas. But again this has got nothing to do with clericalism, just the nature of the liturgy as the service of God, and a kind of interior participation which RS does not understand.

RS points to the prestige of the monastic vocation. But this was not a clerical vocation; only recently have monks been routinely made clerics, and nuns are still not... The orthodoxy of the monks during the Arian crisis was cited by Newman as an example of lay fidelity. The religious vocation is not, of course, the same as the vocation to married life, but nor is it the same as the clerical vocation, and carries none of the institutional, sacramental, and authority implications of the clerical life. Historically, the monk or hermit represented an alternative source of spiritual authority to that of the local priest: sometimes in a complementary way, and sometimes in conflict. But that is part of the genius of the Catholic Church: it is not about monopolising the Holy Spirit.

RS also cites St Augustine's encouragment of the spirituality of 'contempt for the world'. I find this absolutely astonishing, first as 'rejection of the world' is simply scriptural (John 16:33 and passim), and secondly because Augustine is a champion of lay spirituality. It is he, in De Virginitate, who shows how mothers contribute to the Church and have an honoured place within it; it was he who told Count Boniface that his service of the Empire as a general was good, honourable, and his proper vocation. What does a man have to do, I wonder, to escape condemnation?

These sorts of arguments, even if they were stronger, could do nothing to counter what should be obvious: that Constantine, a layman raised to the imperial throne by laymen, and his successors in the Empire and in the Christian kingdoms and republics of the Middle Ages, were not, except for rare moments because of peculiar circumstances, under clerical domination insofar as the exercise of their proper lay functions went. Since such domination is what clericalism means, the era Constantine ushered in was not an era of clericalism, for all the sometimes exaggerated claims made on behalf of the Papacy (as they sometimes were for the Emperor) during that time. Sometimes things went the other way, into caesaropapism. Sometimes conflicts between the lay and clerical realms had more to do with personalities and power struggles than about theological principle. A lot of the time, however, they bumped along, imperfectly, but with a reasonable degree of harmony, and advanced the great work of the Christianisation of Europe.

The revolutions in thinking about Church-State relations, and about lay participation in the liturgy, both of which Russell Shaw wants to embrace, makes it impossible for him to accept this. The Christian centuries seem to become for him centuries of darkness, for all the world as if he were Luther talking about the Babylonish Captivity of the Church.

One of the things RS doesn't like is the idea that the clerical vocation is higher than the lay vocation. He says that this makes it sound as though the laity can't attain holiness. That implication, clearly doesn't hold, since Late Antiquity and the Middle Ages saw a huge amount of lay piety and the recognition of lay holiness, from St Monica to the crusaders. The female mystics of the High Middle Ages, the saintly kings and the saintly beggars, the huge cult of peasant-saints like St Isidore the Farmer, the emphasis on piety we find in the projects and in the wills of merchants and yeomen: if there was a principle in the Middle Ages that holiness was for clerics, a lot of people clearly hadn't read the memo. 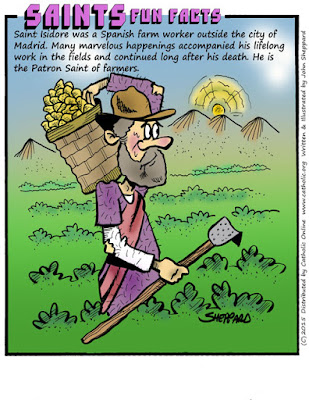 The idea that the clerical vocation, and particularly celibacy, is 'higher' than the vocation to the married state comes, unfortunately for RS, from Scripture. (Matt 19:12; 1 Cor 7:8; 1 Cor 12:31.) The competitive, egalitarian notion that nothing must be superior to anything else is mean-spirited, and in fact completely alien to the pursuit of holiness itself. Like St Therese, we (sane) layfolk are perfectly content to be among the smaller flowers in God's garden. We will not be jealous of St Bernard or St Gregory the Great when, God willing, we reach heaven. We are aware, in any case, that a superiority of vocation does not on its own imply a superiority of holiness, nor yet a superior authority. The highest vocations of all, in the classical Catholic understanding, are the more hidden ones.

I hope to have something more positive to say about clericalism in future posts.

Support the work of the LMS by becoming an 'Anniversary Supporter'.
Posted by Joseph Shaw at 12:53 pm