Why Rees-Mogg is wrong 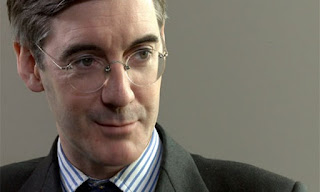 The knives are out for Jacob Rees-Mogg MP for saying that, as a Catholic, he opposes Same Sex Marriage (SSM) and abortion in all circumstances, in this TV interview. I agree and support him, but I feel I must qualify the way he expressed himself, not on a matter of mere technical accuracy but in relation to questions of fundamental importance.

First, he repeatedly notes that he accepts Church teaching, and this is why he opposes these two things. Since many non-Catholics agree with him, today and in the past, this seems a curious way of talking. It seems to be an implicit appeal to religious freedom, and this is indeed how the debate about his comments is now playing out in the media: the question has become 'can Catholics lead political parties, or hold important government positions?' The argument for answering that question in the affirmative is 'religious freedom'. We shouldn't exclude people from positions just because of their religious affiliation. Rees-Mogg and other Catholics should be allowed their eccentric views because those views are part of being Catholic.

This line of argument has a number of unfortunate consequences, not all of which make an appearance in the interview, but all of which will come back to haunt us.

a. It implies that views about SSM and abortion belong on the 'faith' side of a 'faith' vs. 'reason' distinction. In liberal political theory, this means that they are not part of public discourse (which can only appeal to what people in different religions have in common: i.e. reason) and should not be allowed to influence political decision-making. Now, we can argue with this theory and we can dispute the understanding of the relationship between faith and reason it rests upon, but in making brief public statements and in debates the fact that the theory is hugely influential among listeners must be taken into account.

The simple way out here is to emphasise that in the cases of both SSM and abortion Catholics and all others of the same view are appealing not to faith but to reason, a reason which includes the discussion about values which is a necessary part of political discourse. That is, in fact, what the most prominent opponents of SSM and of abortion have consistently laboured to do, in the case of abortion over many decades. Their opponents have equally consistently striven to present them as motivated solely by religious faith (or bigotry, if you prefer), because if that is so they are effectively silenced.

In short, Rees-Mogg's appeal to religious faith plays right into the hands of those who want to make opposition to SSM and to abortion unsayable in public. Once that has happened, they will move on to make it unsayable in private - indeed, they've already started on that. Religious freedom will not protect what has come to be seen as injustice in the public realm: it will not allow us to impose our bigotry about homosexuality on our children any more than it will allow us to practice wife-beating.

b. Suppose, per impossible, that the strategy were successful, and the liberals allowed Catholics the kind of protected private space they sometimes allow Muslims, and say: we must allow those Catholics a bubble of autonomy to be intolerant of homosexual relationships and prevent their daughters getting abortions. Obviously, this is never going to happen, but if it did: it would mean hanging out all our non-Catholic allies out to dry. The extremely courageous secular homosexuals who refuse to conform to type and opposed gay marriage; the non-religious doctors and nurses who can feel in the depths of their being that cutting a tiny human into pieces in the womb is not what they studied medicine to do: what are we saying to them? That they are outside our cosy protected space and can be devoured by the wolves of the new orthodoxy?

c. It is not just a matter of media or political strategy: the idea that our opposition to SSM or abortion derives from faith rather than reason (even when their relationship is correctly understood) is not what the Church teaches. We know that God has asked us to be baptised, from revelation, which we believe by faith. We Catholics are obliged to abstain from meat on Fridays, by command of the Church which has authority over us (and not over non-Catholics). By contrast, we know that marriage cannot be contracted between two people of the same sex, and that killing the unborn is wrong, by reason. It is a matter of Natural Law, not Divine or Ecclesiastical Law.

What the Church tells us is that the obligation of keeping most of the Ten Commandments does not derive from a divine command which could apply to one community and not another, or varied over time. There are many, many obligations in the Old Testament and in the Church which apply to some groups of people and not others, and apply at one time and not at another, and there are others which are universal and unchangeable. We say that the latter are matters of Natural Law. Because the obligations of Natural Law apply to everyone all the time, they must be knowable, at least in principle, to everyone all the time: that is, by reason. When God commanded the Israelites not to kill, on Mount Sinai, He was reminding them of an obligation which already applied to them, and to everyone, and always will.

It should be obvious how vitally important this distinction is in the debates about SSM and abortion. If we allow the impression to form that SSM and abortion is something which Catholics can't do because of rules which apply only to Catholics, then as far as the law of the land is concerned we have lost the argument in a totally irretrievable way. We have also given a totally false impression of the teaching of the Church.

Second, Rees-Mogg keeps saying that marriage is a 'sacrament'. What is the significance of this supposed to be? On this I share the exasperation of the canonist blogger Edward Peters. The sacrament of matrimony takes place when two baptised Christians contract a marriage. The debate about SSM has got nothing, as far as I can see, absolutely nothing, to do with the sacrament of matrimony. It has everything to do with state's recognition of regulation of marriage.

The marriages the state recognises and regulates will be sacramental when they are contracted by two baptised Christians (the Church teaches us); when contracted validly by a couple who are not both baptised Christians they will be what we call 'natural marriages': perfectly licit, binding, life-long, and the proper context for sexual relations and the raising of children.

The only reason I can imagine for Rees-Mogg's baffling but repeated references to sacramentality is that he wants to avail himself of the distinction the government started making in the context of the same sex marriage legislation, between 'civil marriage' and 'religious marriage'. As many people pointed out this was a completely new distinction, with (at that time) no basis in law or linguistic usage. People are either married or they aren't, according to either civil or to canon law. If they are married, they may have been married on a beach in California by a humanist Registrar, or in St Peter's in Rome by the Pope. As a matter of fact, the former may be a sacramental marriage, if the couple were both baptised Christians and neither of them was impeded by Canon Law from getting married in that particular way (as Catholics are, but other Christians are not), and the latter might be a non-sacramental marriage, for example if one of the parties was not baptised.

In short, if Rees-Mogg is trying to appeal to a distinction between marriage-as-religious-ceremony and marriage-without-religious-ceremony, he has chosen the wrong way to do it. Nevertheless, this remains my best explanation for his talking about marriage as a sacrament.

The promise of this spurious distinction between 'civil' and 'religious' marriage was that the question of religious personnel, buildings, and services being used in marriage services could be separated from the question of the legal right to marry, which was being given to same-sex couples. The idea was that such couples could marry, but not have the right to a religious service. This idea collapsed immediately, however, from both directions. On the one side Anglican (and other Protestant) ministers wanted to carry our same-sex marriages in their churches. On the other side, same-sex couples pointed out that they were being denied something not denied to heterosexual couples: clearly wrongful discrimination, if it is conceded that SSM is in fact possible. It was a complete dead-end as a distinction in political terms, as well as being conceptually incoherent.

Third, Rees-Mogg makes a distinction between the two issues, of SSM and abortion, which is seriously unhelpful. He says that in the case of SSM the couple involved are doing something themselves, whereas in the case of abortion the rights of the unborn child are at issue. This may seem plausible enough at first glance, until it is remembered that the whole debate about SSM was about the status of marriage as a legally recognised, public institution.

The implication that we can let homosexual couples who wish to 'marry' get on with it, whereas we can't let abortionists and their clients get on with abortion, suggests that marriage is not a public institution with implications for other married couples, children, and society as a whole. Not only was this suggestion not accepted by the Catholic opposition to SSM, it was not accepted by the proponents of SSM either. Same-sex couples were already legally free to shack up with each other, and engage in sexual activity, and they were, by the time of the SSM debate, free to enter into 'Civil Partnerships' which gave them certain legal privileges.

What was being held back from them was the recognition of their relationships as legally equivalent to marriage. That recognition meant that the law ceased to give proper recognition to the natural institution of marriage, which has a different nature and purpose from other kinds of relationship. It ceased to be possible for the law, and therefore employers, the armed services, the taxman, adoption agencies, and a lot of other institutions and individuals, to recognise the difference between a married couple, and a couple in a same-sex relationship who'd been through a certain legal form. Any rights, privileges, and special treatment accorded to married couples would from then on have to be accorded to the latter as well, which means in practice that such privileges are watered down, distorted, or abolished.

What is surprising about Rees-Mogg's position here, as with his suggestion that opposition to abortion is a matter of faith rather than reason, is how his position undermines that of the many perceptive and courageous defenders of life and marriage, many but not all of them Catholics, who battled and continue to battle for common sense in public debates all over the world. If I were them, I must say I'd be pretty miffed.

Support the work of the LMS by becoming an 'Anniversary Supporter'.
Posted by Joseph Shaw at 4:11 pm