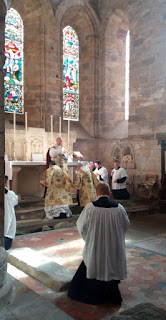 Fr Michael Brown, our Chaplain in the North of England, writes:

The annual Mass at Brinkburn Priory will take place on Saturday 9th September at 12 noon. This will be the twenty-third and last. The choir Antiphon will be singing the Missa L'homme arme' by Guillaume Dufay with the motets Benedicta et venerabilis by Byrd and Parsons Ave Maria. We will also have a Gregorian chant group led by David Edwards. I`m hoping the Mass will be a Solemn High celebration but am still trying to confirm the sacred ministers.
This looks like being the last pilgrimage Mass in Brinkburn, because of 'health and safety' concerns about candles and incense. See Fr Brown's post for more.

Support the work of the LMS by becoming an 'Anniversary Supporter'.
Posted by Joseph Shaw at 1:10 pm