I'm a bit late with this, but Bishop Athanasius Schneider has made a very kind statement about the music arranged for his recent Mass in London, directed by Matthew Schellhorn.

I would like to say a few words about the music I encountered during my recent celebration of the Holy Sacrifice of the Mass in London.

The polyphony of this Mass, sensitively chosen for the celebration and exemplifying the great breadth of the English choral repertoire, was beautifully sung by Cantus Magnus under the direction of Matthew Schellhorn: his generous artistic contributions in the field of Sacred Music are of true value in upholding the dignity of the Sacred Liturgy.

Both the artistry of these works and the sensitivity of their execution clearly evidenced a deep love of the Sacred Liturgy – characteristics intrinsic to the English Catholic music tradition.

Thanks to the support of the Latin Mass Society under its Chairman, Dr Joseph Shaw, the authentic Catholic musical tradition of England, Our Lady’s Dowry, is fostered and kept alive to the benefit of the whole Church.

This rejuvenation of the Church through Sacred Music is greatly encouraging. In the words of His Holiness Pope Emeritus Benedict XVI [then Joseph Cardinal Ratzinger, speaking at VIII International Church Music Congress in Rome, 17 November 1985]: ‘True liturgy, the liturgy of the communion of saints, gives man once again his completeness. […] By “lifting up the heart;” true liturgy allows the buried song to resound in man once again. Indeed, we could now actually say that true liturgy can be recognized by the fact that it liberates from everyday activity and restores to us both the depths and the heights: silence and singing. True liturgy is recognizable because it is cosmic and not limited to a group. True liturgy sings with the angels, and true liturgy is silent with the expectant depths of the universe. And thus true liturgy redeems the earth.’ 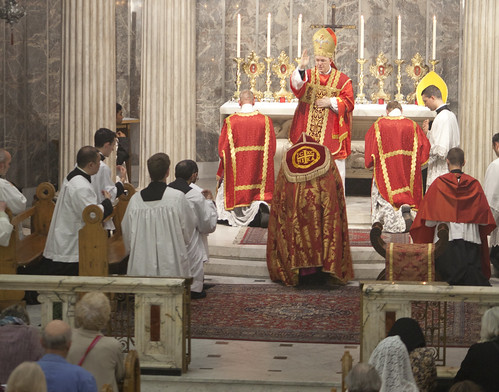