Some worries about Exposition of the Blessed Sacrament: Part 3 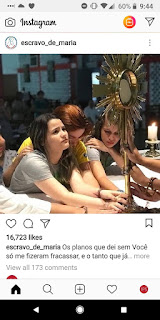 Fr Alexander Sherbrooke, in announcing perpetual exposition in St Patrick's Soho Square, reminds us of the tradition of Exposition in the Basilica of the Sacred Heart on Montmartre in Paris, established, with the church itself, as a national act of reparation. The Forty Hours devotion began as an act of reparation. What does this mean?

Benediction itself is not, primarily, an evangelising tool. It is an opportunity for us to give special honour to Christ in the Blessed Sacrament. We do this by the ceremonies, prayers, and chants, and the watching, in the 40 Hours, through the night. It creates an opportunity to do something a bit like a pilgrimage or a great act of charity, but directed towards the Blessed Sacrament specifically, in recognition of the insults against the holiness of God. It is not something we use for some other purpose. What we, like the builders of Sacré-Cœur, may hope, is that God, being appeased, will visit us and leave a blessing behind.

Let me make explicit the extension of this point to the liturgy in general. We should not use Mass to attract converts. We should celebrate Mass with all possible solemnity because it is an act of worship to God, and that should be done with all possible solemnity. We should, further, do whatever possible to excite the piety of the worshipers, to the same end. Worshipers, taking part in the liturgy, will be transformed by it; lukewarm Catholics will be made fervent; non-Catholics, even, may recognise in it the God who is makes Himself known through the liturgy. But that last effect is not what it is for. Unlike works of Catholic apologetics, unlike preaching, it is not an instrument we use to gain this goal. To make it an instrument in our plans is to undermine its very nature, something which is offered not to men but to God.

How could that last thing happen? Look at this photograph. 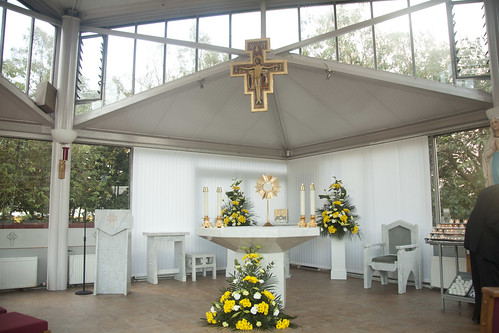 This chapel is part of the shrine complex at Carfin, outside Glasgow, which I visited a few years ago. It is a long-established Catholic shrine and is impressive in many ways. One of the more recent features of the place is a chapel of Perpetual Exposition. Making a detour on a long journey through Scotland, I visited it on a weekday in September. Not surprisingly the place was very quiet. In this chapel there was an old priest - you can just see him on the right. But apart from me and my family, during our brief visit, it was otherwise empty. At a wild guess I'd say that apart from its custodian, if that's what he was (and good for them to have one) that chapel would have been visited by a handful of people in the course of a weekday at most, and more probably by one or two.

In parts of the Philippines, I understand, there are Blessed Sacrament Chapels with the Sacrament exposed which are completely empty all day long. Apart, of course, from the air conditioning unit, and Our Lord.

There is no worship going on here when no-one is present. Empty Exposition Chapels are attempts to make good things happen simply by putting the Blessed Sacrament out. I'm sure no-one plans them to be empty, but bishops must realise that they are after a while, and to the extent that the attitude is 'Oh well let's keep on the Exposition for the odd chance person', we have a problem. We are moving intot the realm of treating the Blessed Sacrament like a magic amulet, which does its work without reference to the response of human beings.

I'm sure Fr Sherbrooke has plans to ensure that the Blessed Sacrament in his church is not left alone. I don't want to give the impression that these posts are a criticism of his specific scheme. This particular worry is more likely to be realised in smaller and less well-supported parishes. More to the point, I am concerned about the general attitude we are taking to the Exposition of the Blessed Sacrament. Why are we doing it? What is it all about?

Here's another way of looking at it. It is always edifying to see the people praying, for example, in the exquisitely beautiful Blessed Sacrament Chapel in Westminster Cathedral, a place which attracts many devout visitors. If I wanted to show a non-believer something about the nature of Catholic belief and the intensely holy thing which we have in this great Sacrament, I might show them these good people on their knees in that lovely chapel, and the very palpable prayerful atmosphere there. The decoration, the architecture, the whole arrangement gives glory to what is contained in the Tabernacle, and there are the people, they are there any time you drop by, showing their love and devotion to Our Lord, on their knees.

Would I show my non-believing friend the empty Exposition chapel at Carfin? If I did, what would he see? Not having the 'eyes of Faith', he would see a wafer of bread exposed to view but apparently ignored, neglected, and held in little regard, by those who claim that this is the Incarnate God.

I haven't said anything about the danger of profanation, but that is very real also.

I just want to say: before we start to promote Exposition everywhere and all the time, let's not lose sight of what it is all about. We expose the Blessed Sacrament to view not to show off, not to thrust into the spotlight the holiest thing we have in the hope that it have some magical effect on our opponents. We do it in order to honour Him. We honour Him by the prayers and ceremonies of Benediction and the Forty Hours, and by the special efforts of maintaining a schedule of watching with Him. If that's not happening, then we are not going to be reaping any evangelical fruits from it. Our fate will be that of the corrupt sons of Eli, killed by the Philistines for their presumption.