Archdiocese of Munich in bizarre stunt with monstrance 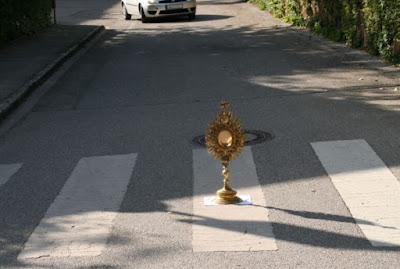 When I first composed this it wasn't clear whether the host in the monstrance being placed in different locations for photographs was consecrated. Apparently it was not. This is a good, but the stunt is still outrageous. As something which holds the Blessed Sacrament, under the old rules the monstrance should not even be touched by a layman. Under the new ones, it should at least be treated with respect (Canon 1171; GIRM 327). In the FIUV Position Paper on Reception under the Form of Bread Alone, Appendix A is devoted to the subject of the handling of sacred vessels. It was forbidden for laymen to touch them in the very earliest sources of Canon law which we have, and is taken for granted by Gregory of Nazianzen, who died before the end of the 4th century. The Munich website would have shocked the Fathers and Doctors of the Church.

---------------------
The Archdiocese of Munich has endorsed a bizarre and sacrilegious website that supposedly celebrates and elaborates the message of Corpus Christi. The creators, two “pastoral advisers,” Michael Raz and Johannes van Kruijsbergen, explain (translated from German by Google):

This festival is about showing people on the spot that God is in the middle of us, in the middle of the world, at all times. The idea arose to photograph the monstrance, i.e. this vessel for showing the body of Christ, in different places of everyday life. The oral project received broad approval from the other sixty or so pastors.

And so we have photographs of a monstrance in a playground, on a roadside bench, on a pedestrian crossing, in a car, next to a building site, on a water feature in a park, and so on, with supremely un-memorable little texts to accompany each one: how our lives are bit like a building site or whatever.
Read the whole thing.
Support the Latin Mass Society
Posted by Joseph Shaw at 1:47 pm