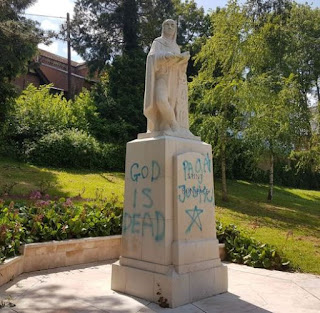 As regular readers know I have an interest in neo-paganism and the related New Age movement. There is a FIUV Position Paper on these phenomena here.
------------------
When St. Boniface traveled from Devon in England to convert the pagans of Germany in the 8th century, he did so with supernatural courage. The Germans’ savagery had been notorious for centuries, and they did, indeed, eventually martyr him, while he was traveling in Frisia (now the Netherlands) in the year 754. Fourteen centuries on, it seems that the pagans have returned to Devon. A stone statue of him in the small town of Crediton has had sprayed onto its pedestal the words “God is dead” and “Pagan justice,” the latter accompanied by a pentangle, the symbol of Satanism.
There is a lot of neo-paganism in England’s bucolic southwest. Glastonbury, some way to the north and east of Crediton, is a particular center. The incongruous combination of messages — suggesting atheism, paganism, and Satanism — is characteristic of the more militant varieties. The local newspaper describes the attackers as “anarchists,” which may be a fair description but seems intended to distract attention from the central point: that this vandalism has got nothing to do with the riots in the United States or London but is the manifestation of local anti-Christian hatred.
Pagan attacks on Christian and above all Catholic symbols and churches are nothing new. What the secular press would rather not say is that Christians are the targets of a sustained, if low-level, campaign of physical and spiritual violence: thefts, vandalism, and sacrilege. That this is so is very clear, talking to Catholics in this part of England, and also to pagan converts to the Faith. Neo-pagans are not all dreamy nature-lovers. It is common for them to harbor a deep antipathy to Christianity.
Read the whole thing.