Communion and Covid: from the Una Voce Federation 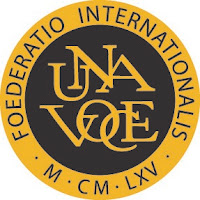 A press release from the FIUV. PDF version here.

Press Release: Communion on the Tongue and Epidemic

In light of the recent statement (and here) by Archbishop Thomas J. Rodi of Mobile, Alabama, in the United States of America, on social distancing during the reception of Holy Communion, and related issues surrounding the reception of Holy Communion around the world in the context of the Coronavirus epidemic, the Foederatio Internationalis Una Voce (FIUV) would like to make the following observations.

1. In the Ordinary Form, the universal law of the Church gives every Catholic the right to receive on the tongue. This was reaffirmed by the Congregation of Divine Worship in the context of earlier public health concerns, the so-called ‘Swine flu’ epidemic of 2009. (See for example RedemptionisSacramentum (2004) 92; Letter of the Congregation of Divine Worship 24th July 2009, Prot. N. 655/09/L.)

2. In the Extraordinary Form, the universal law of the Church allows for the reception of Holy Communion only on the tongue. (See UniversaeEcclesiae (2011) 28; MemorialeDomini (1969).)

3. In neither case can the law of the Church be set aside by the Ordinary.

5. Canon law is rightly very restrictive in the penalties which bishops can impose on their priests for the breach of regulations of their own devising. Bishop Rodi’s attempt to prohibit priests who do not obey his regulations to celebrate public Masses—something which amounts to a partial suspension of a priest—goes beyond what Canon law would appear to justify. (See Canons 1316-1319).

6. It has become increasingly evident that there is no clear scientific basis for the claim that Reception on the Tongue is more likely to transmit the Coronavirus than Reception in the Hand. This has been the expert advice given to Archbishop Sample of Portland, Oregon, USA, and to Archbishop José Antonio Eguren, of Piura, Peru, and it is also the view of the experts involved in the guidelines of the Thomistic Institute of Washington, DC, in the USA. If any bishops around the world are in possession of studies or expert opinions in conflict with this growing consensus, it behooves them to make these public as a matter of urgency.

7. Where local circumstances demand it, the suspension of the Reception of Holy Communion, of the celebration of Masses open to the public, and even the opening of churches for private prayer, have been ordered by bishops and public authorities. These measures are at least even-handed and, insofar as they are justified by genuine public health concerns, do not infringe the rights of the Faithful. As these measures are gradually lifted around the world, we urge bishops to continue to act in accordance with expert advice, not arbitrarily picking out certain priests and faithful for greater restrictions than those imposed on others, and with respect for the rights of the Faithful.

The President and Officers of the Foederatio Internationalis Una Voce, 8th June 2020

The FIUV represents the needs and concerns of the world-wide laity attached to the ancient Latin liturgical tradition, the Extraordinary Form. It has more than 45 member associations from Europe, North and South America, Africa, and Asia.

The Federation has a biennial General Assembly in Rome, and publishes a magazine twice a year, Gregorius Magnus.