Sticker wars in Oxford and Edinburgh 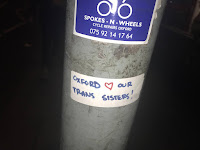 After a pause due to everyone being confined to their homes due to the coronavirus, the war of the fly-posted stickers is hotting up. In Edinburgh, someone has posted stickers on street furniture saying, “Seahorses ARE horses. Hotdogs ARE dogs. There is no debate. #WarOnWomen.” Another says, “I © JK Rowling.” Rowling, the author of the Harry Potter series of children’s books, has been attacked for not supporting the trans agenda. 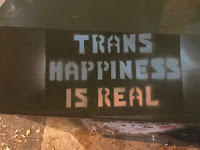 I have seen similar stickers in the streets of Oxford. What the reports tend not to say is that this is a conflict of two sides. Certainly in Oxford, stickers asserting the existence of women (“Woman: noun. Adult human female”) are a response to a long sticker and graffiti campaign by trans activists. Last October, I captured images in Oxford of stickers saying “Oxford [heart] our trans sisters” and spray-painted “Trans happiness is real.” Posting stickers is a form of vandalism and is illegal, as is graffiti, but although the perpetrator was boasting about it on Facebook, where full personal details could be viewed, the local police had better things to do than enforce the law in this case. When someone started posting stickers from an alternative point of view, the reaction was very different. 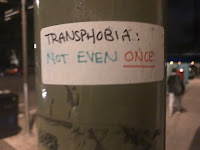 Seeing lamp posts, poles carrying street signs, parking-ticket machines, benches, post boxes and so on covered in stickers, some partially torn off by irritated humans or the effects of the weather, contributes to an impression of lawlessness and neglect. Along with litter from fast-food outlets blowing about the gutters and homeless people sitting in doorways, central Oxford, which is of course a World Heritage Site, can look pretty slummy. Perhaps the police really do have more pressing priorities, but it doesn’t take much imagination to anticipate the consequences of allowing one side in the most contentious cultural issue of the day to have the run of public spaces for their propaganda, in a city full of students. Yes, someone is going to go into competition. 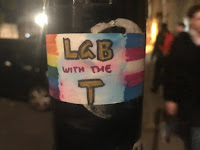 Support the Latin Mass Society
Posted by Joseph Shaw at 9:29 am