That Natvity scene in the Vatican 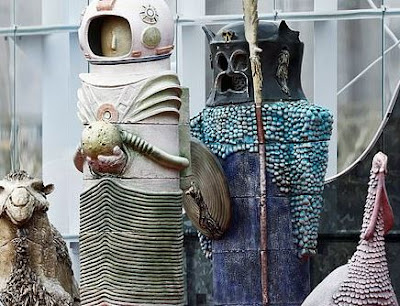 I see that the Daily Mail ridicules the Vatican nativity scene this year as reminiscent of the Daleks from Dr Who. Has it come to this? The world's one artistic superpower, the Catholic Church, so utterly fails an annual chance to evangelise through beauty as to provoke insults. Is this how we bring people to Christ?
Me on LifeSite.

This year, the annual tradition of the large-scale Nativity scene in St Peter’s Square descended into farce when the figures were revealed as childish and hideous products of artistic modernism. The figures were produced over the course of about a decade starting in 1965 and are reminiscent of the mediocre art of that time. One of the figures visiting the crib is an astronaut; others are unrecognizable. There is an angel represented as a bizarre, tower-like object with meaningless rings round it.

There are a great many reasons why this collection of objects is unsuitable for display as the Vatican’s Nativity scene. I leave it to art historians to decide whether it has sufficient historical importance to gather dust in a provincial museum somewhere. If it were not the season of goodwill, I might suggest it be crushed and used for road-building. But the simple and overwhelming point to make about it is that while it might claim to be religious art — art inspired by religious themes or values, or representing a scene with religious significance — it cannot possibly be described as devotional art.

The failure to distinguish these two categories is to blame for a lot of en
tirely inappropriate art in our churches. Consider the images showing the Stations of the Cross. These are designed to assist the user (and, yes, devotional art is used), to enter imaginatively into the scenes of Christ’s sufferings. This assistance to the imagination is the role of all devotional depictions of scenes. To do this effectively, it needs at least to be representational, and not, for example, abstract.

Read the whole thing there.
Support the Latin Mass Society
Posted by Joseph Shaw at 9:09 am