The following interview with me has been published, in Spanish translation, on InfoCatolica. This is the English original.

1.       What does it mean to be president of the International Federation Una Voce?

The Federation an an umbrella group for lay Catholics attached to the ancient Latin liturgy of the Catholic Church. We do not exercise authority over our members, but they come to us for advice, and we represent their concerns in the Holy See and in the world-wide media.

The Federation’s members elect a Council, currently about 20 people from all over the world, and a President; the Council elects the Treasurer and Secretary and allocates other tasks to its members. Because of the geographical spread of councillors, we communicate mainly by email and have instituted regular Zoom meetings.

The President, generally with a colleague or two, usually travels to Rome once a year to meet Curial officials, clergy, journalists, and others, to keep up with what is going on. As Secretary I have been involved in such trips for some years, and it has been very interesting. As well as concrete information, one gets a feeling for the assumptions and habits of mind which govern the Holy See. This insight is reflected in the way we carry out all our work: whether we want to appeal to these assumptions in our representations to the Holy See, or to modify them, one needs to know what they are.

2. It seems today, as things stand, the importance of this association in the defense and promotion of the traditional liturgy is clearer...

Yes indeed. There was a period of time, after Pope Benedict XVI issued Summorum Pontificum, when some people began to say that the work of lay groups campaigning for the Traditional Mass was accomplished, and even that they should shut up shop. It was a strange idea, even at that moment, because local Una Voce groups were busier than ever helping priests learn the Vetus Ordo and set up new centres for its celebration; the Federation for its part was to be consulted on the addition of new saints into the 1962 calendar, and incorporating new Prefaces into the old Missal, as indeed eventually happened. It would have been a strange time to end our work!

In fact, getting bishops to implement Summorum Pontificum was no less a struggle than had been getting them to implement the 1988 Indult, Ecclesia Dei Adflicta. The work of gathering signatures on petitions, negotiating locally, forwarding correspondence to Rome, and taking the matter up with the Holy See continued without a break.

Following Traditionis Custodes, we are back to a time of official hostility to the ancient Mass, and our work is more important than ever: it is not just a matter, now, of getting concessions out of a bishop here or there, but of the very existence of the Vetus Ordo as part of the life of the Church.

The current situation is more akin to that faced by the early leaders of the Federation, such as our founder President, Dr Erich de Saventhem. He faced officials in the Holy See who were convinced that even asking for the Traditional Mass was a failure of loyalty to the Pope. Although Pope Francis has not tried to forbid the celebration of the old Mass, the official programme is now that it should disappear in time.

This official hostility places clergy supportive of the Traditional Mass in a very difficult position. It is vital that lay Catholics, properly organised and well-informed, continue to speak up for them and the ancient Mass itself.

3. On July 4, just before the promulgation of Traditionis Custodes, Una Voce sponsored an announcement in a Roman newspaper, asking Pope Francis in vain to be generous with the Roman rite.

Yes we did. It was an unusual step for us but there were a number of precedents for using this form of communication: petitions in favour of the Traditional Mass were published in newspapers several times in the early days, with some very distinguished names. Jacques Maritain, so influential over Paul VI, appeared on one in 1966, and the famous English petition of 1971, fifty years ago this month, actually achieved its object, in a limited way, with permission for the Mass in England and Wales.

We usually prefer either private exchanges with the Holy See, or taking part in measured public discussion. The previous July we had sent to the Congregation for the Doctrine of the Faith a report about the implementation of Summorum Pontificum in 368 dioceses in 56 countries, to supplement the information they had been receiving from bishops in response to their questionnaire about the Traditional Mass. In the previous year, 2019, we published a book of our ‘Position Papers’ on aspects of the ancient liturgy, a contribution to the debate about its continuing relevance and value.

Although the newspaper advert did not avert Traditionis Custodes, like our other interventions it contributed to the general perception of the situation by the Catholic and the secular press. No one could understand why the Pope had acted so harshly to a group of Catholics who simply wished to worship using a older form of the Catholic liturgy.

4. This is why this year's Summorum Pontificum pilgrimage is more

Yes, this year’s pilgrimage is an opportunity to make it clear that we have not gone away, and also that even under Traditionis Custodes we are being welcomed into Rome’s ancient basilicas.

The success of the Traditional Mass in attracting young people and families, in particular, especially since 2007, has been impossible to deny. Growing from a low base, and often having to contend up with official discouragement and difficult conditions, in many countries the Vetus Ordo has become focus of spiritual revival. As Diane Montagna has suggested, citing the 13,000 people who attended the Chartres Pilgrimage before Covid in 2018, this may even make those uncomfortable with it more determined to crush it. This popularity, nevertheless, is ultimately the guarantee that it will survive.

5. In addition to Una Voce, there will be other associations who pursue the same purpose....

Yes indeed. The Summorum Pontificum Pilgrimage is supported not only by the Federation, but some individual national Una Voce groups, such as the Latin Mass Society of England and Wales and Pro Missa Tridentina of Germany, the organisers of the Chartres Pilgrimage, Notre Dame de Chrétienté, 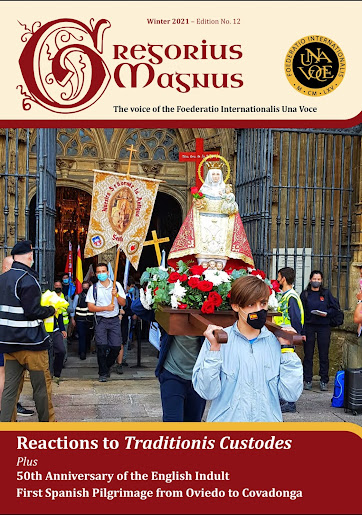 , Paix Liturgique, and a number of smaller lay associations supportive of the Traditional Mass. The event helps us all to keep in touch: a truly international and fraternal movement, closely aligned with the Traditional Priestly Institutes, and with many friends in the Catholic and secular press and academia.

6. How can Catholics around the world support the Federation and keep up with its work?

If you live in a country where there is no Una Voce group affiliated to the Federation, establish one, or offer to be a local contact for us: as well as member associations, we have ‘National Correspondents’ in a number of countries where organising a lay association would be too difficult.

Individuals can also support the Federation with a small annual donation and become a ‘Friend’. We organise a Mass every month for these Friends, for the living and the deceased. They also receive our magazine and other bulletins.

Our magazine, Gregorius Magnus, comes out twice a year, and reports on our work as well as showcasing the activities and reflections of members from all over the world.