'Ministers of Christ' by Peter Kwasniewski 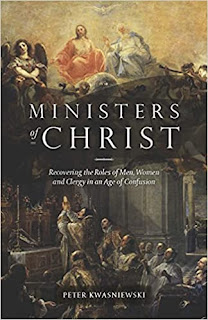 See the book on Amazon UK here; Amazon USA here
From a Rorate Caeli post:
When this project was first conceived over a year ago, my initial idea was to write a critique of Paul VI’s attempted suppression of the subdiaconate and minor orders, of John Paul II’s permission of altar girls, and of Francis’s innovation of female “acolytes” and “lectors.” During its writing, however, the scope of the book considerably broadened to include a full-scale presentation and defense of the traditional sevenfold manifestation of Orders — priest, deacon, subdeacon, lector, acolyte, exorcist, and porter — together with an explanation of the distinct but mutually supporting roles of clergy and laity. In order to accomplish this, I stepped back further to look at the distinction and complementarity of the sexes in the order of creation and the order of redemption, a perspective that provides the ultimate foundation for the Church’s entire teaching on states of life, roles, and ministries. In this way the book serves as a response to the “gender madness” that has afflicted the world and has increasingly infected the Church. ...
Ministers of Christ analyzes the problems with recent popes’ successive innovations in the area of ministry, showing how they have created a theologically and liturgically incoherent situation—a categorical rupture from a tradition firmly rooted in the most profound anthropological, Christological, and ecclesiological principles. In this regard the Church stands in desperate need of the correct (and corrective) witness of the usus antiquior.
Support the Latin Mass Society
Posted by Joseph Shaw at 5:18 pm