As noted in the Latin Mass Society's canonical notes, there are a couple of points in the Congregation for Divine Worship's Responsa ad dubia on which there is good news. In both cases they are indicated by silence.
First, the Responsa are silent about the celebration of the Traditional rites during the Easter Triduum, which the Cardinal Vicar of Rome, Cardinal De Donatis, tried to prohibit in Rome. It was, indeed, an extraordinary thing for him to do, without a sliver of justification in the text of Traditionis Custodes, and it provoked a great deal of comment. The CDW obviously knew about the issue, and chose not to comment on it. Given the detail of the limitations on celebrations of the ancient Mass which it does include, this is a clear indication that they do not want to extend this arbitrary prohibition to whole world, which is to say that they do not think it is a reasonable interpretation of Traditionis Custodes.
Secondly, the Responsa are silent about the private celebration of the Traditional Mass. For reasons which elude me many bishops, including the bishops of England and Wales, have tried to insist that their permission is needed for a priest to celebrate even a private Traditional Mass. (An example is Archbishop McMahon's decree for his diocese, Liverpool.)
There seems absolutely no basis in the text of TC to support this requirement, and the LMS Guidance on TC said so (before, I should add, the bishops started to issue their decrees and ad clerums on the subject). This guidance was then sent to Archbishop Roche, the Prefect of the CDW, by Cardinal Nichols of Westminster, as noted in a letter which subsequently became public. Archbishop Roche's reply indicates that he read them: he describes them as a 'lose interpretation' (he must mean 'loose', but no matter). You can see their exchange of letters here.
Which is to say, there can be no doubt that the Congregation was aware of the issue, and aware that there were different views about it. The Congregation has nevertheless chosen not to comment on the issue, or to correct the LMS' 'lose interpretation' in this regard. Again, in the context of the, sometimes problematic, extra restrictions being placed on celebrations in the Responsa, it seems that they have decided to let this one go.
Is it reasonable to take permission for something from the Congregation's mere silence about it? Yes of course it is. One does not start with the assumption that things are forbidden, and then seek permissions. Is the Church some kind of concentration camp? No: things are permitted until they are forbidden. It is because they were not forbidden in TC, that we have been assuming that they were not forbidden up to now. The continued silence of the CDW confirms that there has been no attempt to forbid them.
This is in fact a principle of Canon law, set out in Canon 18:

Laws which establish a penalty, restrict the free exercise of rights, or contain an exception from the law are subject to strict [i.e. narrow] interpretation.

The universal permission for priests of the Latin Rite to celebrate the Old Mass 'privately' is of considerable significance. It means that it will be possible and practical for priests who have not yet been given permission to celebrate it in public to learn the Mass and to practice celebrating it in private, as in fact usually happens when a priest wants to start celebrating it. Can members of the faithful attend such celebrations? Not only can they, but it is highly recommended.
Pope Benedict in Sacramentum Caritatis (2007) 80 wrote: 'I join the Synod Fathers in recommending "the daily celebration of Mass, even when the faithful are not present." '
This needs to be read with Canon 906: "Except for a just and reasonable cause, a priest is not to celebrate the eucharistic sacrifice without the participation of at least some member of the faithful."
Thus, Masses which are literally sine populo, without any faithful, are better than not celebrating Mass at all: the value of the Mass and the priest's personal spiritual benefit is sufficient justification for celebrating alone. Nevertheless, Masses which are 'private' in the normal sense, of not being advertised and perhaps not being regularly scheduled, should if possible have at least a server; anyone who wishes to attend can of course do so: it is good to go to Mass, not bad! And if they are present, they may receive Holy Communion (see Canons 912 and 918). 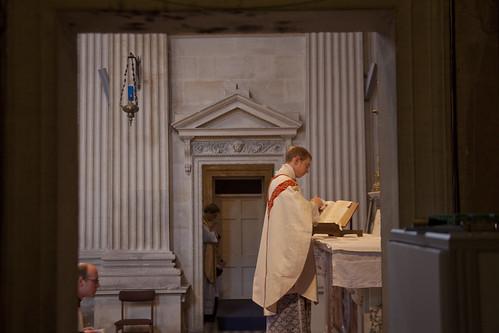