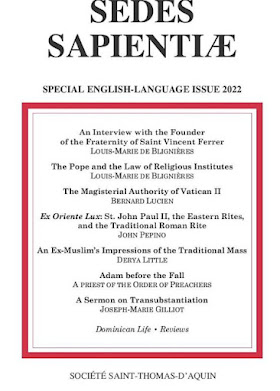 This piece on Rorate Caeli is worth reading. It is from the journal of the Fraternity of St Vincent Ferrer, Sedes Sapientia, which is now available in English translation for the first time.
The author is Derya Little.
------------------------------

When I attended my first traditional Latin Mass years later [after her conversion, first to Protestantism and then to Catholicism] in an old English church with dark walnut pews, that reverence I had experienced during my very first Mass reached a new height where the reason for those tedious [Old Testament] details about worship became clear. This was a God before whom I could kneel; a God who held our existence in his hands, yet chose to humble Himself to become one of us and suffer humiliation and death in love to save us from our own sinfulness.

As the priest and the faithful faced the Lord together, Mass was no longer oriented towards the priest, but to God. It did not matter who the priest was as long as he said the black and did the red. His personality was inconsequential. The prescribed rubrics and prayers made sure that the priest would not be the center of the worship, but stood in persona Christi with and for the people as the Holy Sacrifice of the Mass was offered, surpassing the limits of time and space.
Yes, the priest was not the focus, but neither was the laity. With whispered prayers, the faithful stood, knelt and uttered their own prayers. The silence and solemnity directed our attention to the cross away from ourselves and each other, uniting us in a unique way as we all directed our gaze towards heaven. Of course, these impressions were all before I studied liturgy and the meaning of the rubrics and prayers. Even for a newcomer, the traditional Mass presented a kind of worship that reoriented our bodies, minds and souls to the perfect order where the Lord received the worship He was due as the loving Father. Finally, not only could I bow my head, but I could also kneel in worship and unite my prayers with the entire church. The limelight did not fall on the priest, the server or on the congregation, but to where it belonged: the crucified Word of God who loved the world unto death.
Read the whole thing there.
Support the Latin Mass Society
Posted by Joseph Shaw at 5:51 pm