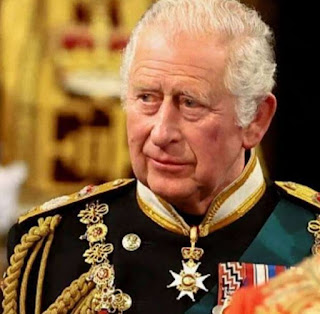 In England and Wales, after the principle Mass on Sunday, we say a Prayer for the Sovereign. The prayer dates back to the 15th century and is used around the world for Catholic monarchs, and a version has even been used for republics where there has been a Concordat with the Pope. The Bishops of England and Wales must have sought and recieved permission to use it for the British sovereign, to emphasis their loyalty; it has been used here since 1850.
It is not used in the Novus Ordo, though it was brought out of retirement for the Jubilee. If you use the 1962 books, however, it is there.
It consists of a sung antiphon followed by a sung collect: the antiphon is begun by a cantor and taken up by everyone, and the celebrant sings the collect. Or it can all be said, if the Mass was a Low Mass.
I encourage all priests who celebrate the Traditional Mass to use this, particularly this Sunday. What Mass is the 'principle Mass on Sunday', once something quite clear-cut, has become rather subjective. But if it is the principle Mass, it should be preceded by another beautiful ceremony, the Asperges. (Again, it is perfectly possible to do this at Low Mass, without singing it.)
This is the text.

All: and hear us in the day that we shall call upon thee.

We beseech thee, almighty God, that thy servant Charles our King, who through thy mercy has undertaken the government of this realm, may also receive an increase of all virtues. Fittingly adorned with these, may he be able to shun all evildoing, [in time of war: to vanquish his enemies,] and, together with the Queen consort and the royal family, to come by thy grace unto thee who art the way, the truth, and the life. Through Christ our Lord.

This is a jpeg of three different Chant settings of the antiphon: there are also polyponic settings. The first given here is the most commonly used one. 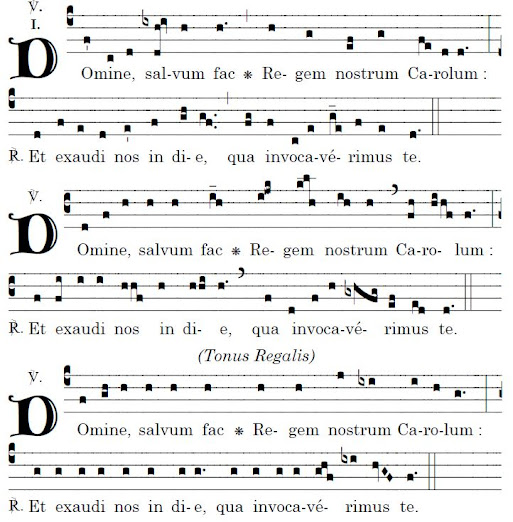 Postscript:
Nothing in life being simple, the following version of the first Chant setting seems to be a better understanding of how to fit in the name 'Carolus' into the melody.

Support the Latin Mass Society
Posted by Joseph Shaw at 11:27 am