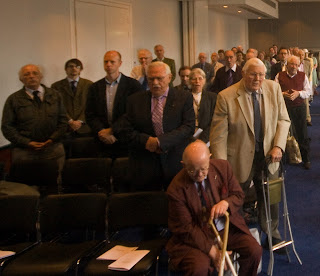 David Lloyd, sometime Chairman of the Latin Mass Society, died early on Saturday morning following a stroke. Please pray for him.
I've not been able to consult the LMS archives yet and right now I don't have a good photograph of him, but he is in the middle of the photo above, with a moustache. Next to him on the right is his predecessor as Chairman, Christopher Inman. David was succeeded by Julian Chadwick, who was succeeded by me. The occasion was the Latin Mass Society Annual General Meeting in 2009, the first with me as Chairman.
David led the Society through the very difficult period of the 1990s in which, despite the friendly overture of Pope John Paul II's Ecclesia Dei, a hostile official attitude towards the Traditional Latin Mass on the part of most bishops and many priests seemed destined to continue forever. He never gave up, however, and he was vindicated by Pope Benedict XVI's Apostolic Letter Summorum Pontificum, which led to the great expansion in availability of the Traditional Mass we enjoy today.
His perseverance, and that of his whole generation, was indispensable to this. Pope Benedict would not have made this concession to the Traditional movement if, at some point in the preceding decades, the movement had given up and gone home.
David was a tough fighter for the Mass, an authentic Catholic gentleman, and a true Welshman.
In paradisum deducant te angeli.
Support the Latin Mass Society
Posted by Joseph Shaw at 11:45 am