A relic of Cardinal Newman 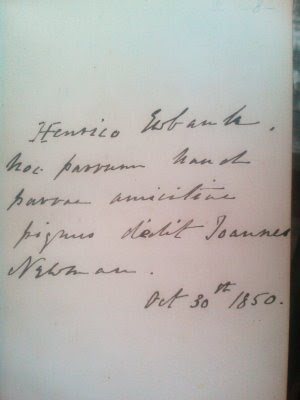 At a lunch party with my in-laws, we were shown a relic of Cardinal Newman. God has ordained that there be very few first-class relics of the Servant of God (just some hair), but there are of course plenty of second-class ones: things he wrote or wore, for example.

It seems that Newman was a friend of an ancestor of my wife, an Anglican divine called Henry Eubank, and gave him a rather handsome copy of the Greek New Testament, with the inscription you can see:

In English: to Henry Eubank, John Newman gives a small token of a not small friendship.

Newman's scholarship and his talent for friendship are among his best known and most attractive qualities, so it is particularly pleasing to see this token which combines a reference to both, and to the fateful year, 1850, in which the Catholic hierarchy was restored. The rage of the English establishment at this act of Catholic self-assertion was the backdrop to the rest of Newman's life. Nevertheless, he made this gift to an Anglican clergyman almost exactly a month after the date of the Pius IX's Bull Universalis Ecclesiae (29th September 1850).
Posted by Joseph Shaw at 4:51 pm