(I haven't yet processed my own pictures but here are some from the NLM. ) 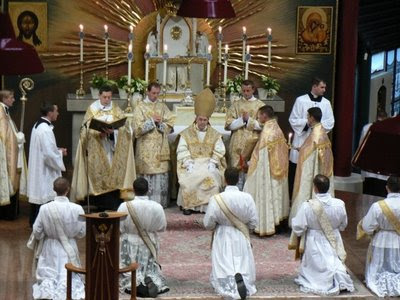 This Summer has sent the priestly ordination of two men from England and Wales in the Fraternity of St Peter: Fr Matthew Goddard, at the FSSP seminary in Denton, Nebraska (USA), and Fr William Barker, at the seminary at Wigratzbad in Bavaria. With a group of ten lay people, who included Leo Darroch, President of the Una Voce International, I traveled to see the ordinations at Wigratzbad, which took place on 27th June.

Fr Barker was ordained, together with four French and German seminarians, in the large modern church which houses a shrine of Our Lady next to the Seminary. The church was packed to the doors, with about 1,000 people; I was told that it was a record for the number of visitors. We managed to squeeze ourselves into different parts of the church among the friends and relations of the ordinands, who included many young people and children. The procession into the church was truly impressive, with 65 priests, including Fraternity priests from all over the world, and priests of other traditional orders, and ranks and ranks of seminarians. 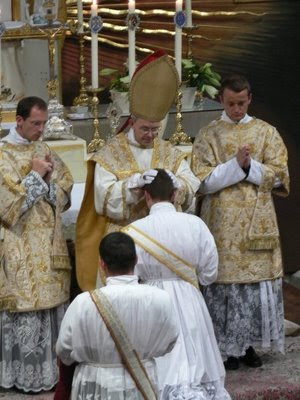 The ordination was celebrated by Bishop Athanasius Schneider, an auxiliary bishop in Kazakhstan (of German extraction) who has recently become well known for his book ‘Dominus est’ (Amazon), arguing for the reception of communion kneeling and on the tongue. This was the first traditional ordination I have attended, and I was very struck by the great beauty and solemnity of the ceremonies. It was a deeply moving and joyful occasion, remarkable for the number of priests present who all laid their hands, in turn, on the ordinands. The Solemn Mass was accompanied by Gregorian Chant sung with great dignity by the seminarians. 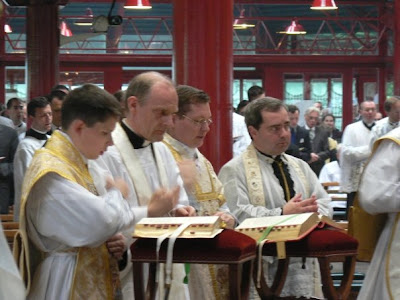 (In this picture: Fr Barker is second from the right, with Fr Conrad Loewnstein second from the left.)
The newly ordained priests were detained by crowds of people seeking their blessing; I was privileged to be blessed by Fr Barker. Leo Darroch and I were invited to the lunch put on for the clergy and the ordinands’ families by the Fraternity in the seminary, where I was able to chat with Fr Conrad Loewenstein FSSP, who is based in Venice, and is one of the sons of our Honorary President, Prince Rupert Loewenstein. The following day, together with Fr Armand de Malleray and Fr Simon Leworthy, the FSSP priests who serve the traditional community in Reading, we attended Fr Barker’s first Mass in an exquisite Baroque parish church a short distance from Wigratzbad.
Nothing more eloquently expresses the progress of the restoration of the Church’s traditions than these ordinations, both for the world in general and for this country in particular. The Fraternity of St Peter and the Institute of Christ the King have not found England and Wales a barren mission field in terms of vocations, and many more such ordinations can be expected in the coming years. In the meantime the Latin Mass Society will continue to help these young men financially; anyone wishing to contribute to this can make a donation to the Latin Mass Society specifically for that purpose. 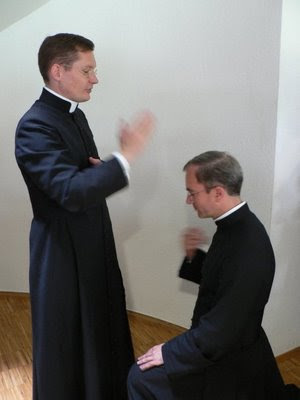 I would like to thank Mr Mark Miles for his highly efficient organization of the trip, and to the FSSP for its kind hospitality.
Posted by Joseph Shaw at 11:59 am