I managed to post a little photo of the Mass at Prinknash Abbey I attended on Saturday, from my IPhone; here are some (slightly) better ones, though the lighting was difficult. Mass was said for us by Fr Mark Hargreaves; there is Low Mass every Saturday at 11am, and on the first Sunday of each month at 3pm. Mass takes place in the monastery chapel, which has a special transept for visitors, who observe the liturgy from the Gospel side. Prinknash is a continuation of the Caldey Island community, a group of Anglican monks who became Catholic en masse in 1913. (There are still monks on Caldey, but these are Cistercians who took over the buildings after the earlier community had been forced sell up: there is even an LMS pilgrimage to the island, which had a monastery on it in the Middle Ages).

The Caldey community was a favourite retreat for Mgr Ronald Knox in his Anglican days - he converted not long after they did. As Anglicans they had endless problems with the hierarchy: being a 'Catholic' Anglican before the Great War was a dangerous game. Knox quotes a friend as saying the 'a stranger listening to the conversation [at Caldey] might have imagined "bishops" to the name applied to some secret band of criminals.' (A Spiritual Aeneid, p70). Like many English religious communities, the monks of Prinknash had a period of enormous growth in the mid 20th Century, which came to an abrupt end in the 1970s. At the end of that time they built a new monastery, complete with Abbey Church, and turned the old one into a guest house. A couple of years ago they moved out of the 1970s building and back into the old monastery, and it was in the old chapel that Mass took place. The 'new' monastery is now derelict - from an architectural point of view it is not a great loss. 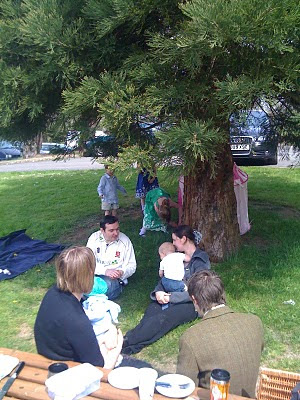 At Mass we met up with the LMS Rep from Birmingham, Matthew Doyle, and the assistant rep for Cheltenham, Damian Barker, for a picnic lunch. We ended up staying all afternoon, looking at the extensive 'Bird Park', which also houses tame deer, goats, ponies and much else. It is a lot of fun with small children, and I recommend it. It is best to take plenty of 20p coins, since these release portions of food for the different kind of animal you encounter. 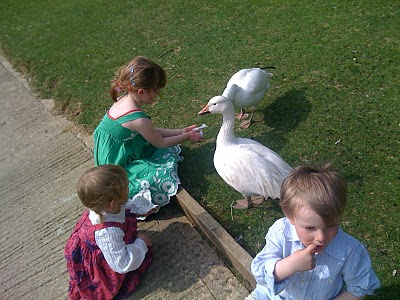 There are a few more photos here.
Posted by Joseph Shaw at 5:43 pm