The hermeneutic of rupture 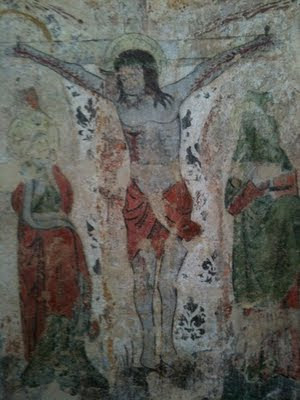 I blogged recently about finding Medieval wall paintings in an Anglican church. What can they think, I said? I managed to offend some-one leaving a comment, though he or she didn't pause long enough to explain how it is supposed to work. Anglicans are proud of these medieval vestiges (after a few centuries of trying to expunge them); these churches often play down the Reformation, saying things like 'we have worshiped here for 900 years' or whatever. And yet they can't claim that the theology and spirituality of a Medieval Doom painting is in continuity with modern Anglicanism (the calvary to the right was near the Doom; it formed the reredos to a nave altar). Ironically, it would be more in continuity with the theology of the people who first white-washed it over in the 16th Century, but that's another story.

But some people in the Catholic Church have a similar problem. Catholics who openly reject the first 19 Centuries of Catholic practice, spirituality and theology exist, but they are no more common than the fire-eating Protestant Anglicans who would still prefer to erase the Medieval paintings in the parish church. A much larger number of Catholics talk confidently about the Church's great history, and even point proudly at our artistic heritage, while wanting to hear as little as possible about the praxis, theology and spirituality which went with it. Indeed, when talking about the past, they would like to pretend that certain awkward facts did not obtain. Those facts are embarassing.

This is part of what the Holy Father condemns as the 'hermaneutic of rupture'. For a nice example, see this illustration from the Catholic Truth Society's children's book, 'Saint John Mary Vianney, the Cure D'Ars.' Don't get me wrong, I like these books; I own the full set and have read each of them many times to my children. And then again I am very aware that they are translations from the Italian - presumably the illustrations were not commissioned by the CTS, but come from Italy too. (The illustrator is a certain Giusy Capizzi.) However, it illustrates the point all too well. 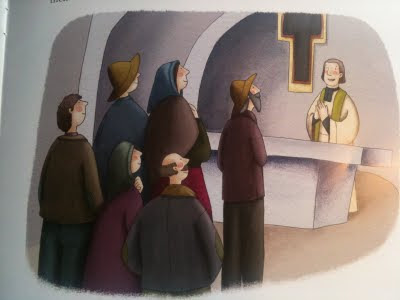 Looking in the St Paul's Bookshop in Westminster the other day, I saw a very similar illustration in the children's Life of St John Vianney published by St Pauls. Is it too embarassing to allow children to see that priests used to say Mass facing East, with the altar against the wall? (Let's not say anything about them wearing proper vestments, having a corpus on the cross, using altar cloths, candles, a Missal, etc. etc.)

If we can't be truthful with our children about the past - and this is the recent past, remember, and indeed the present too in many places - then we clearly have a problem.
Posted by Joseph Shaw at 3:50 pm