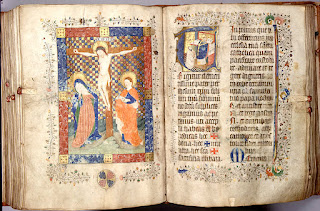 I have just published the FIUV Position Paper on Prefaces on Rorate Caeli - go over there to read it.

The Preface is the bit in the Mass between the Offertory and the Sanctus and Canon. At a Sung Mass in the EF, the priest says the Offertory prayers silently while the choir sings the Offertory antiphon (and sometimes a motet), then he starts singing himself, a short dialogue with the choir followed by the Preface, which itself leads into the Sanctus. If the priest is wearing green, it'll be the Preface of Trinity Sunday; most other days it'll be the Common Preface, but Lent and Easter have their own Preface, as do certain feasts: feasts of the Apostles, for example.

The paper addresses the question of whether new Prefaces should be inserted into the 1962 Missal. The paper gives a thorough, though succinct, account of the history of the question, to conclude that a small number of Prefaces is characteristic of the ancient Latin liturgical tradition specific to the Roman Rite. The argument was used, vis-a-vis the 1970 Missal, that there used to be lots of Prefaces, and that the reformed Missal represented a restoration of this, but the argument lacks force for three reasons.

1. The era of large numbers of Prefaces pre-dates the 11th Century. From then on a very limited number - ten or twelve - became standard. Bugnini and his collaborators were quite happy to argue that the 11th Century was 'late' and everything which happened then or since should be regarded as ephemeral, but this is clearly absurd. The small number of Prefaces represents the continuous custom of nine centuries.

2. There is no evidence that the Roman Rite, as opposed to Gallican, Mozarabic and other Rites, had ever contained a large number of Prefaces. The books containing these great collections are not Roman liturgical books; mostly they are collections, typical of no particular place or time, but gathering texts from all over Europe. What limited evidence does exist of the pre-11th Century Roman Rite, in fact, suggests the opposite: the Hadrianum, an important 8th Century Roman Missal, contains only 14 Prefaces.

3. When Bugnini set about 'restoring' a multiplicity of Prefaces, for the most part he did not actually use the ones found in the ancient collections. Like the 'Anaphora of Hippolitus', his Prefaces are in some cases inspired by ancient texts, but they are edited to make them conform to the liturgical spirit - both favoured theological ideas and format - of the reformed liturgy. Many come not from ancient Latin sources, but Greek ones. Others are entirely new compositions. Whatever we may say about them, in no sense do they represent a restoration of the practice of the ancient Roman Rite.

The 'neo-Gallican' Missals produced in the 18th Century tried to resurrect a larger number of Prefaces, although many of these seem to have been new compositions. A selection of these continued in use in France and Belgium, and specific places like Lyons, which had its own Use, right up to 1962, and form part of the Extraordinay Form for those places today. Even at its most expansive, however (19, in the 1738 'Vintimille' Missal; a few more seem to have been added in the following decades), this tradition never rivalled the number found in the 1970 Missal: 82.

A strange thing happened between 1919 and 1928: under Pope Benedict XV and Pius XI, four more Prefaces were introduced, increasing the total number from 12 to 16. These served to give greater emphasis to certain devotions these popes wanted to promote: for the Dead and St Joseph (1919), and Christ the King and the Sacred Heart  (1925 and 1928). As suddenly as it had started, this production of new Prefaces stopped. It is an entirely exceptional moment in the history of the Roman Rite. The promulgation even of important new feasts has never, before or since, at least since the 11th Century, been accompanied by the composition of new Prefaces. If it had, we'd have a lot more in 1962 Missal than we do.


The Position Paper ends with a plea for a period of liturgical stability. Traditionalists don't deny the reality of organic development in the liturgy: the 1962 Missal is the result of such development. Indeed it is the Bugnini-like denial of the validity of development for the last nine centuries which is the real enemy of organic development. But this moment in the history of the liturgy is not ripe for the introduction of new Prefaces. We have just come through an exceptional period of liturgical turmoil. The Extraordinary Form is spreading rapidly among priests and laity, who need time to absorb it as it is. In the words of Sacrosanctum Concilium, does 'the good of the Church genuinely and certainly require' new Prefaces in the EF? It seems to us that it does not.