Stuart McCullough at the LMS Conference You now can listen to Stuart McCullough's talk, 'Spiritual Warfare and the End of Abortion' here (MP3).

Stuart McCullough is a blogger himself, with the Ecumenical Diablog; the Good Counsel Network, for whom he is a fundraiser and counselor, has another blog, Maria Stops Abortion.

It was Stuart's wife, Clare McCullough, who founded the Good Counsel Network in London in 1997, inspired by the work of the Chicago Women's Centre in the USA. 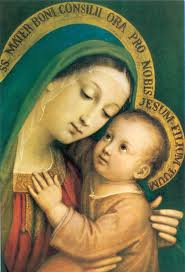 Stuart protested his lack of experience as a speaker, but his talk was both very interesting and moving. It describes the way the basic approach of the Good Counsel Network was developed, first in Hawaii and then elsewhere in the United States, and how it works in practice in England. He discusses the difficulties pro-life counselors and the women they talk to face, and the causes of abortion. Among other fascinating points, he said that the great majority of women they see, who are usually convinced that abortion is their only way out when they first arrive, are taking some kind of contraception. One woman who got pregnant was using no fewer than 3 forms of contraception simultaneously. All contraception has a failure rate, and in the context of hundreds of thousands of people using it hundreds of times, this translates into a very large number of 'unplanned pregnancies'. Offering young girls contraception with the suggestion that they can have problem-free sex with their boyfriends is a really, really, stupid idea. But that is exactly what our schools are doing. Another interesting point which struck me was that, while many fathers push their partners into abortion, the majority say 'I will support you whatever you do'. This sounds nice but in fact places the whole responsibility on the shoulders of the mother. If she has an abortion, and regrets it, that is her fault: she chose that. If she keeps the baby, and needs help, that's her problem too: she could always have chosen an abortion, the father never asked her not to.

The theme he kept returning to, however, was the importance of prayer, the Mass, which is offered in the private chapel near their counseling room, and adoration of the Blessed Sacrament. The Good Counsel Network puts out urgent prayer requests on occasion by text message; you can also sign up to say five decades of the Rosary once a month for their intentions, so they have as many as possible every single day. I am on that rota myself.

Stuart's talk was truly inspiring, and he received prolonged applause. We were very privileged to hear from someone doing such wonderful work at the front line of the pro-life cause, and I would like to reiterate his appeal for support for the Good Counsel Network: money, by all means, but above all prayer.  Go to the Good Counsel Network website to see what you can do.
Posted by Joseph Shaw at 10:00 am