Why should ladies wear mantillas in church?

Mary O'Regan of The Path Less Taken has posted about an amusing video from a young trad in America about different ways of wearing a mantilla. It is charming, but the explanation, in the middle of the video, of the meaning of the practice is a bit odd. It is odd because it makes no reference to the authoritative discussion in Scripture (St Paul), and its relationship with the Scriptural rationale is unclear.

This young lady's explanation is two-fold: it stops others in the congregation being distracted by female hair, and it is like the veil worn by a bride, and so suggests the union of the soul with Christ. The first part might have some application. The second doesn't make sense on its own, for it invites two questions which aren't answered: why do brides wear veils? and why don't men?


But I would have you know, that the head of every man is Christ; and the head of the woman is the man; and the head of Christ is God. [4] Every man praying or prophesying with his head covered, disgraceth his head. [5] But every woman praying or prophesying with her head not covered, disgraceth her head: for it is all one as if she were shaven. [6] For if a woman be not covered, let her be shorn. But if it be a shame to a woman to be shorn or made bald, let her cover her head. [7] The man indeed ought not to cover his head, because he is the image and glory of God; but the woman is the glory of the man. [8] For the man is not of the woman, but the woman of the man. [9] For the man was not created for the woman, but the woman for the man. [10] Therefore ought the woman to have a power over her head, because of the angels. [11] But yet neither is the man without the woman, nor the woman without the man, in the Lord. [12] For as the woman is of the man, so also is the man by the woman: but all things of God. [13] You yourselves judge: doth it become a woman, to pray unto God uncovered? [14] Doth not even nature itself teach you, that a man indeed, if he nourish his hair, it is a shame unto him? [15] But if a woman nourish her hair, it is a glory to her; for her hair is given to her for a covering.

The passages of Scripture which we find embarrassing are among the most important, because they are saying something we have not integrated into our lives. If we are embarrassed by this, then we need to examine ourselves.

What St Paul is saying is that the difference between the sexes symbolises the relationship between God and Creation. It goes naturally with Ephesians 5.22ff.

The complementarity of the sexes, about which we hear so much in the context of Catholic opposition both to same-sex marriage and to the ordination of women, must have some determinate content. What exactly is this complementarity? How does it manifest itself? What is the difference between the sexes? This is St Paul's answer: as God has authority over creation, and as Christ sacrificed himself for mankind, so the husband has authority over the family, and must sacrifice himself, at need, for it. As the Church is the body of Christ, which He loves as Himself, so the feminine principle, represented by the wife, represents the body, or the heart, of the family, which the husband must view as his own body. 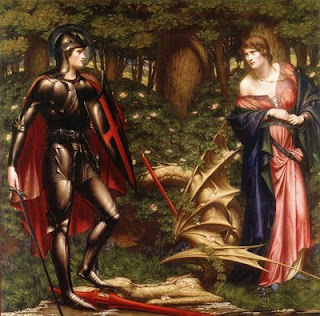 This is related of course to the issue of female servers at Mass: the Position Paper on that has a lot more to say. It should not be seen as a negative thing for women: women can more perfectly represent the spousal character of the Church, which is why Our Lady is a symbol of the Church, and why only women can be consecrated virgins. (Thus the parallel with bridal apparel appealed to in the video does, in fact, make sense.) Again, the bride is the recipient of the wonderful blessings given in the traditional Nuptial Mass, because she represents the family: in blessing her, the priest is blessing the family as a whole. This role of representing the family, the Church, society, and creation, is at the heart of the notion of Christian chivalry, the honouring and protection of women as a way of honouring and protecting the world. It is because men can more perfectly represent Christ, on the other hand, that we have a male clergy.

It is interesting to note that in the 1992 Catechism of the Catholic Church complementarity is not mentioned in the discussion of marriage, and a quotation from Ephesians on the subject of marriage cuts out what St Paul says about it (1616). It IS mentioned in the discussion of the Sixth Commandment (2333), and it is emphasised that homosexual relationships lack the complementarity that the Catechism recognises is an essential part of marital relationships (2357). It might appear that while the notion of complementarity is necessary in dealing with the challenge of homosexuality, it is still best to say as little as possible about it. To put it mildly, this does not put the Church in the best possible position to deal with the challenges of today. It is time to re-appropriate this essential teaching, and time that it be reflected publicly also, by ladies wearing mantillas in church. Veiled ladies and bare-headed men in church is an iconographic representation of the Church's teaching on the complementarity of the sexes; and boy, do we need that teaching today.
Posted by Joseph Shaw at 10:00 am