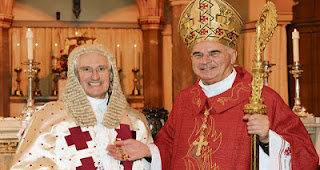 Brian, Lord Gill, who became a Patron of the Latin Mass Society earlier this year, has succeeded Lord Hamilton as Lord President of the Court of Session, the most senior judge in Scotland. The appointment was welcomed by Scotland's First Minister, Alex Salmond, who praised Lord Gill's integrity and independence. The photograph show him with Cardinal O'Brien, who was giving him a papal knighthood.
Posted by Joseph Shaw at 1:17 pm