Am I at liberty to cross this field? 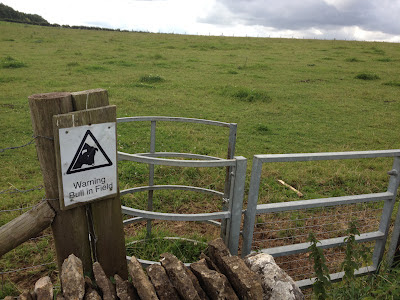 This is a philosophical question. Legal rights don't always make it possible to do a thing. Non-legal obstacles can render them unworkable. This is a public right of way (near Enstone, Oxfordshire), but I decided against using it. The bull was standing right against the gate on the other side of the field where you were supposed to go out. He didn't look very cuddly.

Actually I feel sorry for landowners with public rights of way across their land; why shouldn't they put a bull in a field they own? In this case using an alternative route was not difficult. It is a bit different when you have a legal right to use something - say, a particularly form of the Roman Rite - but risk being trampled to death by your fellow clergy, or gored by a bishop, if you exercise it. 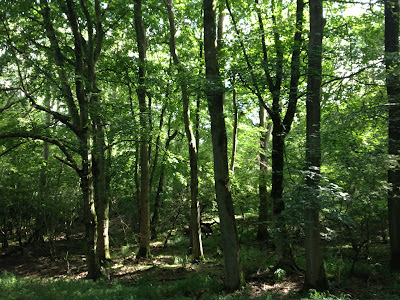 I decided the other day to extend my walking range by taking a bus to a place I could walk home from, to Enstone in this case. This made it possible for me to walk through the Wychwood Forest, Oxfordshire's only ancient forest, which as a hunting forest for the King once extended far beyond the bit which is left. It is still impressive today.

The reason I spent an entire day walking across Oxfordshire is that I'm in training again, this time for the Walsingham Pilgrimage. We are getting ready, but you can still sign up. Two and a half days of walking, from Ely to Walsingham, with singing, the Traditional Mass, and good company, starting on Thursday 23th August.  If you NOT one of those people who've been complaining that 'life is difficult enough already', and so think an effort like this for the Glory of God and the Conversion of England isn't worth it, then join us!
Posted by Joseph Shaw at 10:00 am