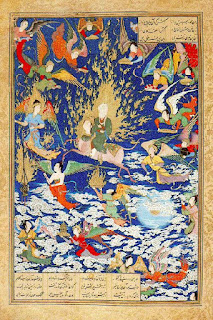 Richard Dawkins has reaped a rich harvest of controversy, notably from his fellow atheists, for suggesting that Mehdi Hasan, who thinks that the Prophet Mahommed went to heaven on a winged horse, is for that reason unfit to write 'serious' articles for the New Statesman.

I have no idea if this belief is mainstream in Islam, or the badge of a particular group withing it. (I do think it is a huge mistake for outsiders to label different strands of Islam 'extremist', 'fundamentalist' or 'orthodox': who are we to say?) Dawkins has been accused of bigotry. I think it would be more accurate to describe him as deeply confused.

He compares the belief in a winged horse to belief that there are 'fairies at the bottom of the garden', presumably this is supposed to indicate that believers are feeble-minded. I am inclined to think that evidence of fairies at the bottom of the garden (at least the gardens that I know) is very weak, and for that reason belief in them is not justified. Evidence for the existence of God is another matter. I'm not going to lay it out here, but plenty of intellectually serious people have taken this evidence seriously: it is in a completely different category. And it is not belief in God which Dawkins (this time) is saying is preposterous: he seems to think he has a softer target with belief in winged horses.

The questions then are: On the basis that it is not outrageously irrational to believe in God, Mehdi Hasan's rationality depends on the answers to questions 1-3. The answers are obviously 'Yes' to the first two questions. The answer to 3 depends on the evidence. I confess I don't even know if this incident is in the Koran or elsewhere. The story of Elijah going to heaven in a fiery chariot is, of course, in the Bible (2 Kings 2.11).

Many Christian biblical critics are as frightened of stories like this about Elijah as Dawkins is of the story about Mahomed, and want to say it must be a metaphor or a myth or something. As a philosopher, I don't have any expertise in the literary genre of the Elijah Cycle (as it is called) in 2 Kings, but I will say, rather: why not? Why shouldn't God send a fiery chariot to collect Elijah?

Do you think it is difficult for God to arrange such a thing? Do you think it would be complicated, or inconvenient, or an effort? Just get things in perspective, guys. It's God we are talking about. Of course He can send a flying horse, or a fiery chariot, to give someone a lift; of course He can part the Red Sea or stop the sun to prolong the day during a battle - and to prevent any untoward consequences for the solar system at the same time. It is not in the slightest a big deal for Him to do all this and more. He made the Universe, remember. He is God.
Posted by Joseph Shaw at 9:27 am