Update: Catholic Voices have apologised for their earlier mistake: all credit to them. They are, however, still behind the curve, since they have subjected Stephen Morgan's gappy numbers to another kind of statistical analysis, a ten-year moving average. I'd like to see this re-done with the full set of data for the 1950s. However I also think it is a largely meaningless exercise to debate whether we should talk of a peak in 1937 or in 1956, because of the effect of the second world war.

I now have complete statistics for ordinations in the 1950s - the numbers Deacon Stephen Morgan (@trisagion) compiled had gaps, because of gaps in his archive of Catholic Directories. As far as the 1950s are concerned, the gaps are now filled.

Below is a revised graph. As well as adding the statistics from the National Office of Vocations for secular ordinations since 1982, I've now added their statistics for 'entry' into 'Order Priests' (sic), which they say they have from the Conference of Religious Superiors. I must say I find this a baffling and frustrating formula: what does it mean? Is a Benedictine monastery an 'order [of] priests', or (the alternative) an 'order [of] brothers'? Or does this mean priests or brothers joining orders? Except that they don't - they join as postulants, then they are novices, then they may be ordained, or not. So what does 'entry' mean: the novitiate, or solemn (permanent) profession? How many drop out between 'entry' and ordination?  Is the column for priests double counting the column for brothers, where non-ordained members are 'brothers'? What happens when a secular cleric joins an order - is he counted? Why are these numbers so much higher than the statistics for ordinations by the religious orders in 1982-1988 given by the Catholic Directories for those years? And why is the data for 1988 missing? Why can't they just give us a record of ordinations to the priesthood in religious orders?

Nevertheless, for what it is worth, here it is. If what they are measuring is consistent, it gives us an idea of the trend, if nothing else. The trend is similar to that for secular ordinations, without the filip from the Anglican converts in the mid-1990s. It bottomed out slightly earlier, with 10 entrants in 1993, a collapse of 90% from the peak of 101 in 1961. Except the figure for 1961 is for ordinations, so the collapse is bigger than that. 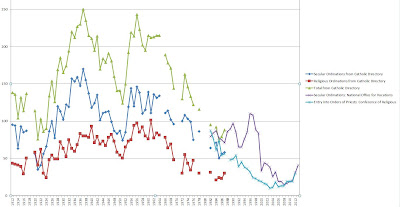 But wait, but wait! The decline of the Church since the Second Vatican Council is a myth! So all these statistics are wrong, our eyes are playing us tricks, the empty churches are an illusion, the closure of seminaries isn't really happening, just put on these green glasses and you will realise that the city you inhabit is made of emerald! 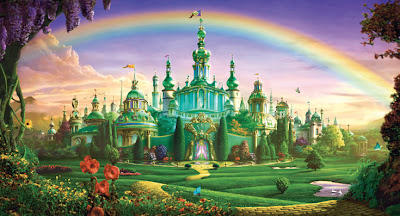 The Excel file with the numbers and graph can be downloaded here.
Posted by Joseph Shaw at 10:28 am