Ordination Statistics for England and Wales

The diligent Rev Stephen Morgan (@trisagion) and some chums have been through a huge pile of old Catholic Directories to answer the question posed by Catholic Voices and the Vocations Office: how do ordinations today, with their current upswing, compare with those of previous decades? I've parked his raw data on the Latin Mass Society site here.

To recap, the Vocations Office printed some very strange-looking figures for the period before 1980, with average annual numbers of ordinations given for each decade weirdly low: 6 for the 1930s, for example. Catholic Voices posted an article on their own blog which leapt on these to make the counter-intuitive claim that we are enjoying a higher number of ordinations now than in the 1950s. When questioned on this, the Vocations Office pulled their pre-1980 figures. Catholic Voices say they are 'looking into it.'

I have turned Deacon Morgan's columns of figures into two graphs: one showing ordinations, the other, the total number of clergy. These are figures from the Catholic Directory year by year, and they stop in the 1980s, when the Directory stopping publishing them (at least, in the same format). Where a Directory was missing from the archive he was using, there is a gap in the line, but the general picture remains very clear.  I have added the year-by-year numbers since 1980 given by the Vocations Office, as a separate line. The Directories distinguished ordinations for Secular and Religious clergy; I include both lines of numbers plus a 'total' for the two together; the Vocations Office statistics are supposed to be secular clergy only.

(Double-click to see them bigger.)

The Vocations Office is clearly counting differently from the Directories, and have higher figures where the two series overlap. There are a number of possible explanations. (Are they counting ordinations to the permanent diaconate? Is there some inconsistency between the two series about the treatment of non-religious communities of priests like the Oratorians?) It doesn't matter: they show they same trend, of steep decline starting in the mid 1960s.

In the 1950s and 1960s there were, almost every year for which there are figures, more than 200 ordinations. The twin bounces provided by the Papal Visit of 1982 and the Anglican influx after 1992 are very visible; we even managed just over 100 for two years. This year we are overjoyed to be anticipating 41 secular ordinations, not counting the Ordinariate, which (Catholic Voices say) should add another 11. Great. In 1937, the number of secular vocations was over 150; that was in a year that the religious orders ordained 80 men to the priesthood.

Another source has scanned the relevant pages of the Directory for 1940 and 1941; I have put these on my Flickr page. If you need persuading that this avalanche of clergy in the mid century was real, you can read their names. (And you can note, they aren't all Irish names.) Under 'Ampleforth' I see the legendary Fr James Forbes, later a Master of St Benet's Hall. Oh, these chaps were real enough. 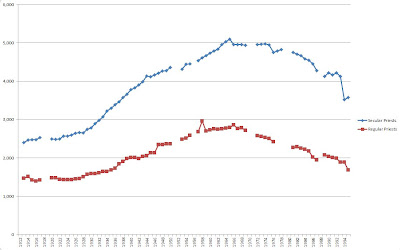 I sincerely hope that Catholic Voices has the sense to modify or scrap that blog post of theirs. In the interests of posterity, here is the money quote in a screenshot taken today. 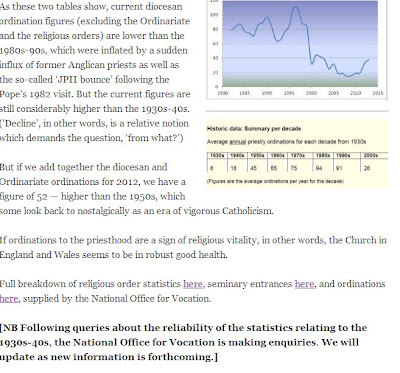 The obvious fact about the statistics is the horrible and persistent decline which started in the mid 1960s, in both ordinations and clergy numbers. The latter reflects the tragic mass laicisations of the 1970s and 1980s.

Now I am by no means a fundamentalist when it comes to explaining everything in terms of Vatican II: I've blogged about the broader social factors at work. But facts must be faced. The blips upwards in the 1990s were just that - blips. You can see the trend reasserting itself after the bulge, as if nothing had happened. That trend would have taken us to zero by now had it continued.

It hasn't. Just before the crash landing things changed. This is now the fifth year running of improving numbers. It is nothing like enough to replace the priests dying and retiring: the ones ordained forty years ago. But it a lot better than nothing. It is not to be minimised, but not to be exaggerated either. Let's be sensible about it for heaven's sake, and pray for vocations.