I don't want to become obsessed with this subject (to which the background is here), but Catholic Voices has put out - together with a very handsome apology - a rather puzzling bit of statistical analysis designed to salvage something of their original claim, that things today are as good or better than they were in the 1950s: an analysis of the data provided by Stephen Morgan by a 'decadal' (ie 10-year) 'moving average'.

I can't claim to have any great statistical expertise, but a 'ten-year average' is an average of the last ten years, and a 'moving average' is when you plot those averages on a graph. To be honest, I am more than a little baffled by the graph above. For one thing, I think its creator, Joe Ronan, has forgotten to divide the totals for each decade (the ten years up to 1922, the ten years up to 1923 etc.) by ten: instead of an average of 145 ordinations a year in the decade up to 1936, for example, he has plotted 1,450, the total number of ordinations for the decade.

But above all, I'd like to know what he did when he had a year in which there was no data. Did he put in an average? Or zero?

There were four missing years of data in the 1950s in the data Stephen Morgan supplied: 1951, 1952, 1956 and 1957. For the decade up to and including 1958, the six years for which Stephen supplied data told us about 544 ordinations. Not bad for 6 years: we now know that the total for that decade was a stonking 1,106. Ok, Joe Ronan didn't know that, though if the guy updating the CV blog today had checked Rorate Caeli first it would have been kind to tell him that more data was now available. Never mind. But with a gap in the data, what Joe Ronan should have done is divide 544 (the total for six years) by six and multiply by ten, which would have given him an estimated average for the decade of 91, or an estimated total for the decade of 906, a figure far below the real one but at least methodologically defensible. What the graph appears to show, however, is 544. Oh dear, oh dear.

What that dip in the red line in the course of the 1950s shows is not that ordinations fell, but simply that the Portsmouth Diocese archive (where Stephen Morgan got his data) is missing a few editions of the Catholic Directory. 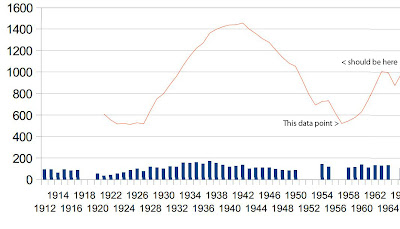 I don't want to be rude to some volunteer at Catholic Voices who is, I assume, doing his best. But please, Catholic Voices: get a grip. You are putting this stuff out into the public domain.

Now, the point of the graph is that the post-war rise in ordinations is so much less impressive than the inter-war rise in ordinations, that it makes sense to look at the graph overall as a decline starting in the 1930s. Since we now have the full set of data for the 1950s at least, I've created a graph using the number of secular ordinations and a (real) ten-year moving average. As you'd expect, the moving average is a smoother line which is below the main data line when that is in an upward trend, and above it when it is in a downward trend. (That is what moving averages are for, to show long-term trends.) The missing data for the 1950s made unclear just how strong the post-war rebound in ordinations was. 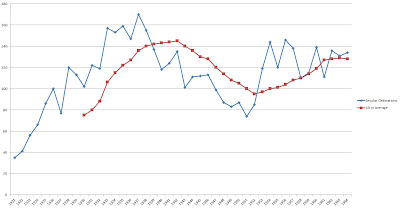 Another point to note is that, for some reason, the religious orders supplied a larger proportion of ordinations after the War than they had before the War; indeed their numbers were higher in the 1950s than in the 1930s. So looking at only ordinations of the secular clergy is misleading: the total number of ordinations, secular and religious, peaked at 250 in 1937, and then at 243 in 1956. The difference between those two numbers is not something I would want to build any grand narrative upon. See my post on the religious orders here.

It is impossible to say what would have happened if it had not been for the second world war. Many young men were killed before they could choose a profession. Others were perhaps inspired by their experiences to dedicate themselves to God. The same, conflicting, results no doubt manifested themselves after the First World War. But as far as the statistics are concerned, the contrast between the 1930s peak and the 1950s peak is not nearly so marked as Catholic Voices is claiming.

Perhaps another apology would be asking too much, but please Catholic Voices, either explain what I have failed to understand, or remove this dreadful graph.
Posted by Joseph Shaw at 1:26 pm