Leon Podles, who inspired a series of posts in this blog about the loss of men from the Church, doesn't have much to say about the liturgy, but he quotes the Jesuit theologian Patrick Arnold on the subject. I've tracked down the source and here below is the passage at length.

Arnold's book Wildmen, Warriors and Kings is surprising because he is a theological liberal. He thinks that the ordination of woman is obviously right and that clerical celibacy is bad. He thinks that feminism is good but that men need to have their own, parallel, 'men's movement' and 'men's spirituality'. He is a disciple of Robert Bly, who even contributes a preface to the book. Bly has some interesting things to say (for example in his Sibling Society) but is on occasion extremely negative about the Church. Bly and Arnold owe a lot to Jung, something which - without going into details - should set off a lot of alarm bells. (A good introduction is this MP3 talk.)

I give Arnold credit, nonetheless, for thinking about an issue most people then, and now, don't want to think about. Particularly impressive is his confrontation of the misandry, the hatred of men, which is found in the liberal theological environment he himself inhabited. Here are his reflections about modern liturgy: it is clear that the traditional Mass is not on his radar at all, but is nevertheless the answer to the problem he identifies.

Patrick Arnold: Wildmen, Warriors, and Kings (1992), p77-78
For many years liturgists felt that highly formalized worship services bored people and turned them off; "creative" liturgies were proposed as the solution. Unfortunately, the resulting Butterfly, Banner, and Balloon Extravaganzas severely alienated many men. The most saccharine outbreaks of forced liturgical excitement featured fluttering dancers floating down the aisles like wood-nymphs, goofy pseudo-rites forced on the congregation with almost fascist authoritarianism, and a host of silly schticks usually accompanied by inane music. It was exciting all right; any men felt exciting enough to rise from their pews and walk right out the door. What was their problem? It seems that most men are instantly turned off by surprise spontaneity in ritual circumstances; moreover, ceremonies that are entirely nice, sweet, and happy usually strike men as phoney and completely unconnected with the harsh world they experience every day.

What attracts men to public prayer, then? Men need a certain regularity and consistency in their worship; spontaneity has its appeal for men, but not in the midst of ritual. The highly popular masculine traditions of Judaism and Islam, for example, encourage set times, places, and formulae for daily prayer and worship, and men respond to these demands very well. Ritually, men like to know exactly what is expected of them and what the rules are; religion helps men when it challenges them to clear, reasonable, and achievable goals, whether liturgically or devotionally. Men like to be able to succeed at something; their lives are filled with enough failure, real and imagined, as it is.

Even more central to masculine worship is the notion of the Transcendent. In deemphasizing in recent generations a concern with absolutes and ultimates, heaven and hell, and eternity and infinity, modern Christianity has taken a decisive turn towards feminine religion, which is typically interested in the immanent and the incarnational, in finding God in the small things, the everyday, and the mundane. These are genuine Christian qualities and mark the beautiful spirituality of a Therese of Lisieux or a Mother Teresa of Calcutta; without doubt, men also need such grounding emphases. These traits are not, however, essentially masculine in nature. As liberal religion stresses increasingly the immanent and "horizontal" dimension of faith to the exclusion of the transcendent and "vertical" reality, it inadvertently ignores the voracious appetite of men for the Great, the Wholly Other, and the Eternal.

A liturgy or a sermon that truly speaks to men will tend to "pitch" men outside themselves, confront them with the Absolute, and offer them an eschatological viewpoint on life. Admittedly, this is hard to do in the Mass or eucharistic liturgy, which is structured around the domestic motif of the dining table. Yet a service that simply emphasizes the sacredness and eternity of the eucharistic actions, the infinite value of the ceremony, and the worldwide solidarity of the prayer is already on the way to capturing the male imagination.

If we are to ask makes to take worship seriously, we ought to provide rites which are serious. A liturgy that appeals to men possesses a quality the Hebrews called kabod ('glory') and the Romans gravitas ('gravity'); both words at root means 'weightiness' and connote a sense of dignified importance and seriousness. Ceremonies that are trivial or flighty don't command male respect. This does not mean liturgies have to be grim or long; ...

A final comment on one particular kind of liturgy is in order here. One of the most alienating worship services that most men ever encounter is their own wedding ceremony. The blunt truth is that Christian nuptials are rarely celebrated anymore as a rite truly sensitive to the spiritual needs of both husband and wife. On the contrary, the typical wedding is often a once-in-a-lifetime chance for the bride and her mother to fulfil their childhood fantasies. No expense is too high or detail too frivolous. While some men endure the numerous niceties and high expense with generosity, others visibly grind their teeth and roll their eyes at all the gushing over and fluttering about. Does anyone really ask men what kind of wedding rite they would prefer and give them choices any more meaningful than which Karen Carpenter song will be sung? Real liturgical reform is in order here; men, too, have a right to find their wedding ceremony a meaningful and appropriate experience. 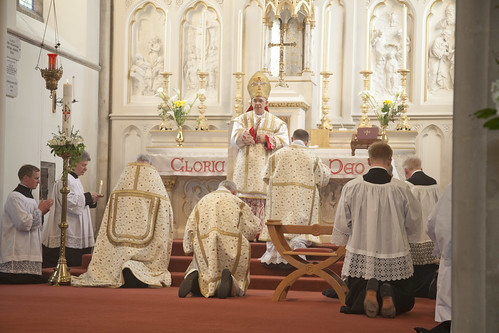