On men taking back the Church


Further to the debate about masculinity and the liturgy, and an article about Cardinal Burke's remarks on related issues (which quotes me) by Tim Stanley in the Catholic Herald, Madeleine Teahan asks a pertinent question:

An implicit difference in expectation is the glaring irony at the heart of Cardinal Burke’s argument: namely, that men are passive victims of radical feminism, bad liturgy and poor catechesis. It’s as if they are a sex who are done unto; totally enfeebled and powerless to fight back. Doesn’t this portrayal undermine the typically masculine capacity for chivalry and strength that Cardinal Burke also refers to?

It's not that Miss Teahan denies that men are absent from our churches, it is just that she thinks the blame should be assigned squarely to the victims of poor catechesis and bad liturgy, and not to those who create those things. Perhaps she has in mind that passage in the Gospel where Jesus says that anyone who causes scandal to (i.e., causes to sin), one of these 'little ones' puts a millstone round the little ones' necks and gets away scot free.

No, wait...!
We have to distinguish what we mean by the 'the Church' and the men who aren't at Sunday Mass. Males are typically put off the practice of the Faith between the ages of 12 and 17 or thereabouts. The classic scenario is that they don't come back to church after Confirmation, or after whatever compulsory element of religion there might be at school has come to an end. On the other hand, when we talk about 'the Church' in relation to prudential policies ('the Church should do more for the poor / the third world / whatever') we are talking about the human leadership of the Church, paradigmatically bishops, in their fifties and sixties, but also senior diocesan officials and parish priests, and their lay assistants, mostly of about the same age. The people representing 'the Church' in this contrast are not the same people as the ones being put off. Indeed, it is difficult to imagine two groups of UK Catholics with less in common.

As I think Miss Teahan agrees, unorthodox, liberal catechesis, and down-with-the-kids liturgy larded with abuses, are viewed by the typical young Catholic as embarrassing, incoherent, and deeply unattractive. It would appear that the boys are particularly put off, since they aren't to be seen for dust. She would like them to try a little harder to discover the real Church, but they have made a perfectly reasonable judgement in relation to the Church as she has been manifested to them. To tell them that their teachers and whatever clergy they've encountered may well be dishonest knaves as well as everything else is not going to redeem the situation. The children may be committing a sin, but it's not necessarily a greater one than the sin of children of Anglican or agnostic parents who, similarly, mostly fail to use the online Catechism to find out the real teaching of the Church, and argue themselves into it in the teeth of every real, live Catholic they have ever met. When it comes to lapsation because of failures of the Church, we should avoid the temptation to blame the victims: particularly when they are children.

On the other side of the contrast, on the other hand, I entirely agree with Miss Teahan: as far as the institutional Church goes, the problems we have derive from a failure of male leadership, an inescapable reality since the leadership of the institutional Church is, whether we like it or not, exclusively male. Even here, however, the more we delve into it, the less we might want to condemn indiscriminately.

One huge problem the leadership of the Church faced from about the mid '60s, which has led to a liturgy (and catechesis) which does not appeal to men, is the fact that many of them were, and some remain, absolutely terrified of feminists. Pathetic? Perhaps, but the fact is that the emotional, yet articulate, powerfully demanding female is something which they have not been psychologically equipped to deal with. The older generation had no formation in modern ideas which would enable them to understand the significance of the feminist movement; those leaving seminary after about 1967 had often been taught that the feminists were right. Nor were they equipped for real leadership. The older ones were taught that feminine passivity was akin to holiness, and that obedience was the only virtue (I exaggerate a little); the younger ones discovered that the ability to say 'boo' to a goose (aka 'rigidity') was often regarded by seminary rectors as incompatible with a vocation to the priesthood.

Cardinal Burke remarked that the liturgy appears to boys and young men as, essentially, part of the feminine realm; we can see this graphically in the swamping of the sanctuary with women (altar girls, lectors, Extraordinary Ministers of Holy Communion). The priest who wanted to stop this happening had a double dilemma: the ladies who offered to perform these functions were overwhelmingly well-meaning, pious, and sincere, so to put them off seems unfair; on the other hand, their presence is regarded as ideologically totemic by the scariest busybodies to be found in the Church.

If he did try to resist these things he was accused not only of illiberal and old-fashioned attitudes, but simultaneously (and this was a stroke of genius), of a failure to adhere even to old-fashioned values, on the basis that he is attacking women. He is being unchivalrous.

A distorted and unhealthy understanding of chivalry is definitely part of the problem: chivalry understood as men indiscriminately giving way to women (i.e., running away), rather than as defending that community which the female represents (i.e., not running away). (See Tolkein on chivalry here.) When I defended the collectivity of women who attend the Traditional Mass from the outrageous personal abuse directed at them by Prof Tracey Rowland, I was myself accused of a lack of chivalry. Go figure.

But, returning to developments from the '60s to the '90s, that was then. However much we may regret the development of the practices which make for a feminised liturgy, removing them is an even greater challenge than resisting them in the first place. I must say frankly that in many places a priest may be faced with an impossible situation. I have argued before that a priest today would often do better to focus on introducing the Extraordinary Form into his parish, and come to that to any schools he might be called on to serve, than to expend his energy in futile trench warfare with the liturgy committee and their many allies. 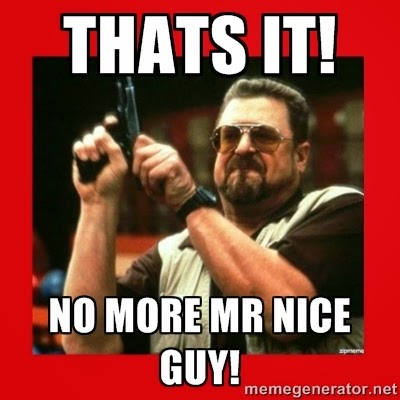 Madeleine Teahan rightly demands effective male leadership in the Church, leadership which has often been abdicated but which is indispensible. That doesn't mean we should ignore prudential considerations, or give way to brutality, but it does mean, for orthodox bishops and priests, and indeed for fathers of families: when defending the community they are charged to care for, No more Mr Nice Guy.