The Reform of the Reform, and a more peaceful alternative 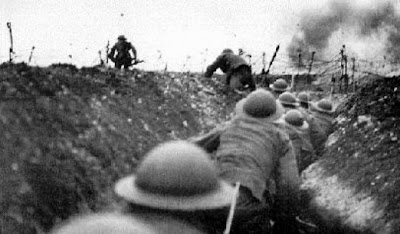 The term 'Reform of the Reform' (RotR?) most obviously means reforms made to the 1970 Missal by the Holy Father, of which the prime example is the new English translation. By extension, when priests choose options within the 1970 Missal, or put a stop to liturgical abuses, with a view to resacralising the liturgy, they can be described as supporting or acting on the RotR. In this post I'm not talking about legislative reform, just practical changes within the context of the current rules. Now I'm in favour of changes to the way the 1970 Mass is said, and for that matter to changes to the rules governing it, which are aimed at increasing the awareness of ordinary Catholics that the Mass is a sacred thing, that God is Holy, and that we approach the Blessed Sacrament with fear and trembling. Readers of the Tablet newspaper may think these things are thoroughly bad, but I'm not addressing them today. I'm in favour of these things because they are good in themselves, and because making people aware of these things ipso facto undermines objections to the Church's liturgical traditions. People say: surely it is bad to emphasise the difference between priest and people? Surely it is unnecessary to grovel before the Blessed Sacrament? Surely the most important thing with a liturgical text is that it is instantly understood by an uncatechised 5 yr-old? It is the 'surely' which is the most irritating part, since the claims run counter to the whole tenor of the Church's liturgy, and the Temple liturgy before that, since at least the time of Moses. We need to expose Catholics to a liturgy in which makes these platitudes seem less obvious: to introduce them to the idea that what we are engaged in is worship, in which sacred gestures, clothes, postures and languages are actually appropriate. So Reform of the Reform gets the thumbs up from me. The practical question is whether a priest is better off making incremental changes to his existing parish Masses in the direction of resacralisation, or introducing the Extraordinary Form. And although these are not mutually exclusive, the debate gets interesting here.

For this is where the argument I noted in my last post come in. To repeat it, I have heard it said:

Now what looks thoroughly silly when set out on the screen can actually dominate one's thinking if one isn't careful, and this seems to be happening with some proponents of RotR. The EF - they say - is a bridge too far, we'll never get people to accept it - or, at least, not soon. But we can do something: we can improve the Novus Ordo right away, and keep on doing this till it's practically indistinguishable from the Traditional Mass. Er, right. The problem is that the objections which people have to the EF are exactly the same as the objections they have to the 'practically indistinguishable' OF. And they will raise those objections at every step of the journey from the familiar OF to the Reform of the Reform OF. So the first question comes down to this: is it better to have a decade of trench warefare over 100 incremental changes, or a month of high-intensity conflict when you've introduced all the changes at once? The World War I Western Front, or 'shock and awe'? Whether the end result of the changes is a Latin Novus Ordo with all the bells and whistles, or the TLM, is less important - and if you really think they are indistinguishable, then it's not important at all.

It is far from obvious that the trench warfare option is always preferable. I suppose the answer will depend on local conditions, including the character of the priest. But actually it is the wrong question. Because you almost never have only one Mass in a parish to consider. John Hunwicke, writing in the current Mass of Ages (the magazine of the Latin Mass Society), gives the example of Anglo-Catholics in the 1930s who imposed the Roman Rite on unsuspecting parishoners in place of the Book of Common Prayer, and faced an unsurprisingly strong reaction. (One parishoner placed a dead donkey on a vicar's doorstep.) Isn't it better, he asks, to move gradually? Not necessarily, as I've just explained, but the real point is that Catholic parish priests are in a completely different situation. In a 1930s Anglican parish you'd only have one Communion service (if that) on a Sunday, with Matins before it and Evensong in the evening. The Anglo-Catholic vicar's obvious move was to change from the Prayer Book to the Roman Rite for this one service. But in a modern Catholic parish you will have two or three Masses on a Sunday, and many have more. No Catholic priest today, wanting to increase the sacrality of his services, is going to change all of them to the TLM overnight. He will either change one of them, or, more likely (if the time in the parish timetable exists, and if he has the energy), create a new Mass slot and put the EF in that. So a new priest arrives in a parish with, say, two or three Sunday Masses, which each seem to him seriously deficient from the point of view of sacrality. There are entrenched groups of liturgical planners, people composing bidding prayers, folk musicians, Extraorinary Ministers of Holy Commuion, lay readers, altar girls, and leaders of children's liturgies, in each of these Masses, and they all know the Bishop's postal address, and probably his phone number too. So what does he do? The RotR crowd would suggest: introduce a bit of Latin, a bit of chant, use the Roman Canon, encourage communion on the tongue, get rid of the guitars, cut down and then eliminate the EMHCs, and then more, and more, and more, along the same lines. Following this advice with vigour will lead to one or both of two things for the priest: a nervous breakdown or a transferral to Outer Mongolia by the bishop. Following this advice with sensitivity and astuteness, low cunning and the weapons of spiritual warfare, will perhaps lead to the priest making gradual progress and suffering a bloodless martyrdom in the process. But there is an alternative: introduce the Traditional Mass into a currently vacant spot.

Suddenly, you are building on a greenfield site. There are no entrenched special interests. If anyone asks why you are using Latin or Chant or the Roman Canon or only male servers you say 'I'm afraid I have to - it is part of this Form of the Mass.' People who don't like it won't go. But as time goes on it will gather a congregation and gradually the priest has allies in the parish, people who will do things for him and defend him from attack. And they, and the Traditional Mass itself, will have a gradually transformative effect on the whole parish. People will still complain, because some people just hate the Traditional Mass. But to complain to the bishop 'Fr X has introduced an EF Mass to which I never go' is so obviously absurd, and what the priest has done is in such obvious accordance with Summorum Pontificum, that the priest is in a vastly stronger position than in the RotR scenario.

Of course there are complications. In some parishes it is impossible to introduce an entirely new Mass, though the general principle remains: by leaving most of the Masses more or less intact, having one EF Mass will attract less, and less reasonable, criticism. Again, there may be things happening in those OF Masses which simply must be stopped without delay: serious liturgical abuses. But in dealing with these the priest is in a much stronger position than when trying to get the folk group to learn Gregorian Chant. After all, whether we like it or not, Chant is not obligatory in the Ordinary Form. The point here is not that this strategy creates a perfect situation overnight. But given that we all understand that it will take a lot of time to get the liturgy in the parish where we want it to be, what kind of policy will work best? To make a frontal attack on the vested interests in their entrenched positions, or to outflank them: doing something it is harder for them to oppose, but will have just as much, and probably far more, effect on the overall liturgical atmosphere of the parish as time goes on.

The general point is this: jumping straight into the Traditional Mass is actually a way to resacrilise the liturgy in a parish in a more serene manner than attempting to steer existing OF Masses in the Reform of the Reform direction. You are less likely to have people complaining to the bishop. You are less likely to have people lapsing or going to other parishes. It is not a choice between 'shock and awe' and the Western Front: there is an alternative, and unsurprisingly the priests saying the EF in England and Wales today have all done exactly what I have described.

It remains to those many priests, not yet committed to the Extraordinary Form, who are concerned about sacrality, to realise that the best way to address the problem is not by arguing with the liturgy committee, the folk group, and Uncle Tom Cobley about having the Sanctus in Latin this week, but by learning the Traditional Mass, and introducing it into parish life as something in addition to, not instead of, the Ordinary Form. This won't solve all your problems overnight, but it will set things moving in a positive direction.

Photos (apart from the military ones!): Low Mass on a Sunday evening in St George's Warminster, said by Fr Bede Rowe, the LMS Regional Chaplain for the Southwest. Fr Rowe introduced this Mass in addition to his other masses soon after arriving in the parish. See my post here.
Posted by Joseph Shaw at 10:00 am