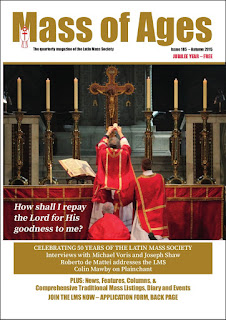 I'm being a bit slow with blogging at the moment, but the new edition of Mass of Ages, the first to be edited by Dylan Parry, is now available in your friendly local church (if not, ask your friendly local priest to stock it: it is FREE), and from the LMS Office.

Members have their copies delivered to their homes, so join here.

The Autumn 2015 edition, under the new editorship of Dylan Parry, looks at how a petition attracting thousands of signatures and a public meeting of those keen to save the Latin Mass led to the Society being founded in 1965. A feature article ‘1965: The Society’s First Year’ draws on extracts from a paper by Fr Nicholas Schofield on the origins of the LMS, quoting Sir Arnold Lunn, the Society’s first President, who said:  ‘We fully realise the vernacular Mass meets a real need, but we are perplexed by the attitude of those Catholics who wish to deny us what we gladly concede to them: the opportunity to hear Mass in the preferred language. We love the Latin Mass because we are hearing the actual words which were heard or said by the faithful for nearly two thousand years.’

Canon Francis Altiere’s article ‘Evangelising Preston’, tells how, in just one year, the Institute of Christ the King at St Walburge’s Church has revived the Church. Previously open for just one hour a week, St Walburge’s is now open every day for daily Mass and Divine Office in the traditional rite and is attracting converts. ‘Some members of our congregation already knew this liturgy,’ he says, ‘but what is striking is how many of them, both cradle Catholics and converts, have come to discover this liturgy only this year…Far from being an obstacle to evangelisation, the traditional liturgy communicates a sense of the sacred that the open-minded are happy to discover.’

LMS Patron Colin Mawby, former Master of Music at Westminster Cathedral, celebrates the Joy of Plainsong. He asks, ‘Why is chant so eminently suitable for divine worship?’ and answers this by saying, ‘ The main reason is that it portrays a feeling of timelessness and spirituality and in doing so, opens minds to a world beyond human comprehension; it leads people to glimpse the face of God.’  ‘Our musical heritage is sublime’, he continues, ‘and must never be cast aside. Liturgical music didn’t begin in 1964, it is thousands of years old and encapsulates the deepest feelings of both musicians and worshippers.’ He concludes, ‘Pope Benedict gave a most positive lead when he wrote about the old [liturgy] complementing the new but this can only happen when the old is widely known and appreciated. It is not the preserve of “Old Fogeys”: it is the very life-blood of our worship.’

Judge James Patrick, a Deacon in the Personal Ordinariate of Our Lady of Walsingham, reflects on Law and the Gospel, asking how our criminal justice system is compatible with the Christian gospel. He concludes, ‘The call of Christ is for us all to build up the Kingdom of God. That there is crime and injustice is in part our fault, for we have not done enough to show Christ to a waiting world. The Kingdom of God is at hand, yet its fullness is not yet here. Until kerygma, until we cast off our humanity, until we all judge ourselves more harshly than we judge one another, then we will need a law that deters more than it rehabilitates.’
Also in this issue of Mass of Ages:

LMS Chairman Joseph Shaw looks back over the achievements of the LMS and reflects on his six-year tenure as Chairman.In Illo Tempore quotes previous Chairmen, in office between 1975 and 1995.
Mass of Ages editor Dylan Parry interviews Catholic broadcaster Michael Voris.
Journalist Mary O’Regan takes a light-hearted look at what makes the ideal husband, urging Catholic women to hold out for a man they think they can ‘obey.’

Clare Stevens, the LMS PR and Publicity Officer, reports on talks delivered by Prof. Roberto de Mattei at two recent events in London – the Michael Davies Memorial Lecture and the AGM. The full texts of his talks can be read here and here.

Stefano Mazzeo, TV writer and director and LMS representative, describes how devotion to the Tradtional Rite inspires his film-making.

All our regular features are there, including comment and opinion pieces, the Lone Veiler, Art & Devotion, your letters, a prize crossword, full listings of Traditional Masses across England and Wales, and much more besides.

Support the work of the LMS by becoming an 'Anniversary Supporter'.
Posted by Joseph Shaw at 2:58 pm