The Mandatum: let's not be hard on Pope Francis 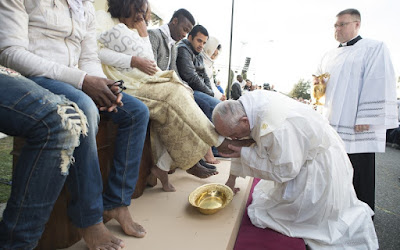 I see from my stats a small spike of interest in this post: someone must have linked to it somewhere. So I thought I'd repost it. I'll repost a follow-up post on the same subject tomorrow. They both first appeared in January 2016.

It is tempting to see the decree allowing women's feet to be washed on Maundy Thursday as an indication of an acceleration of liturgical decay underway with Pope Francis, following his breaking of the rule up to now. However, what has happened is no different from what happened under his predecessors.

Bl Pope Paul VI gave in to the pressure of endemic abuse when he allowed the reception of Communion in the hand. But there are other examples too from his troubled reign. One of the most peculiar documents of the Papal Magisterium is his Sacrificium laudis, an Apostolic Letter directed to religious superiors, begging, cajoling, and ordering them to preserve Latin in the Office. You won't find this document in the Acta Apostolicis Sedis, and only in Italian on the Vatican website. The speed of its transformation into waste-paper gives new meaning to the phrase 'dead on arrival'. (You'll find an English translation on the LMS website.)


Pope St John Paul II gave way, again because of the pressure of abuses, on Altar girls. It was he, also, who permitted another set of countries to take up Communion in the hand. It was on his watch, again, that the restrictions on Communion under Both Kinds fell by the wayside - this was forbidden on Sundays, in theory, and for 'large congregations', but the American bishops defied him, and he gave in. It was under him that major investigations of American seminaries and women religious were turned into whitewash, liturgical abuses were established on an industrial scale at the World Youth Days, and being blessed by witch doctors, kissing the Koran, and putting Buddha on altars became de rigeur. Religious sisters not wearing their habits sat right in front of him at a Papal Mass of beatification in Australia in 1995. That day, liturgical discipline was dead.

Pope Benedict XVI allowed Communion in the hand in Poland, where Pope John Paul II never had. Did Pope JP know something his successor did not? It was Pope Benedict who chose to continue JPII's Youth Day Masses, and Assisi ecumenical gatherings, at a moment when it would have been perfectly possible to let both series stop, and merely tried to make them less awful. But he did not continue JPII's series of Instructions lambasting liturgical abuses: he must have realised it was pointless. It was under Pope Benedict that the investigation of the American women's religious lost its conservative mojo: yes, he was the one who appointed João, Cardinal Braz de Aviz as Prefect of the Congregation for Religious, in 2011, with entirely predictable results.

There is, however, an important difference between the actions of these three Popes and Pope Francis. As far as one can tell, Paul VI, John Paul II, and Pope Benedict believed that poor liturgical discipline was a bad thing. Paul VI lamented Communion in the hand and the loss of Latin. John Paul II apparently dislike Altar girls, and condemned abuses vigorously before permitting them. Pope Benedict surely had no sympathy with the ghastly things which were happening in American convents. There is no reason to think that Pope Francis is similarly conflicted when he allows the washing of women's feet on Maundy Thursday.

And another thing: to be crass about it, the Mandatum is not all that important. It happens once a year, and it is optional. It is not an integral part of the Maundy Thursday service - despite its name. Allowing Altar girls and EMHCs and syncetistic pagan rites during Mass are far more serious issues.

Let's not get on a high horse about Pope Francis at this juncture. This is just another step, and not a particularly large one, in the development of the Ordinary Form away from Tradition, and it is not happening because of the personality of the Pope. It is happening because the Novus Ordo Missae of 1970 was unstable. It included a series of compromises which were never going to last. Given the direction of pressure, these compromises were always going to unravel the same way.

This is the real lesson to be learnt. Attempting to shore up the tottering edifice of the Novus Ordo with ferocious-sounding rules has failed. JPII and Pope Benedict didn't manage it, and obviously - obviously - Pope Francis, though not a liturgical 'meddler', is not going to succeed in a project in which he has no interest. If it is collapsing, it is collapsing under the weight of its own contradictions.