I've just purchased a read an intriguing, short book on the restoration of rare, late-16th century printed Gradual: a collection of chants for the Church's liturgical year. The Gradual in question was beautifully printed in the Spanish Netherlands, using hand-copied monastic chant books as its sources.

The chant notation (shown, left) looks very like that used in the editions most singers use today, though it used five staves and lacks some of the specialised note-shapes (singers will note that there don't seem to be any quilismas or liquescents). Again, it (obviously) doesn't include the editorial marks added by the monks of Solesmes to most modern editions.

Although the melodies are somewhat different from the ones used today, which have been restored by reference to the oldest available manuscripts, they are quite different from the simplified and clunkily-printed chant used immediately before the Solesmes-influenced 1907 Graduale Romanum, upon which later editions have been based, exemplified by the 1870 Pustet edition shown below.

The story of the restoration is fascinating, as it the discussion of the place the Gradual had in the
Counter Reformation programme of restoration in the Spanish Netherlands.

The book, Gradual by Julian Berkely and Tony Scotland, is available, with a pre-publication discount, at £13 from Shelf Lives (inc UK p & p) up to Mon 15th May; thereafter it will be bookshops, including John Sandoe in London, at £15, or from Amazon at £16 (inc UK p & p).


An illustrated monograph about the rescue, restoration and history of a monumental book of early printed Gregorian Chant, and its continuing use in the revival of the traditional Latin liturgy. The Gradual of the title, containing the chants of the Mass, was published by the great Renaissance printer, Jan Moretus, at the Plantin Press in Antwerp in 1598. This was the supreme achievement of a new technology supplanting the art of illuminated manuscripts – and an act of defiance by a Church besieged by the Protestant forces of the Reformation. 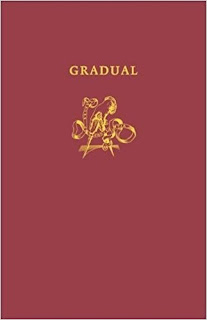 While the Dutch War of Independence raged around Antwerp, the Plantin Press spared no expense in creating this important and infl uential work, sending copies throughout the Catholic world to keep the Divine Office alive, and to raise the spirits of the recusant faithful. Among these were the aristocratic English women who fled Elizabeth’s persecutions for the relative safety of the Spanish Netherlands, and founded a Benedictine convent in Brussels, under the abbacy of Dame Joanna Berkeley. The ancient Chants which the Brussels Dames sang from their Moretus Gradual more than four hundred years ago had already survived a millennium – and are drawing a new generation of young people today.