Debate about teaching music (and Latin) 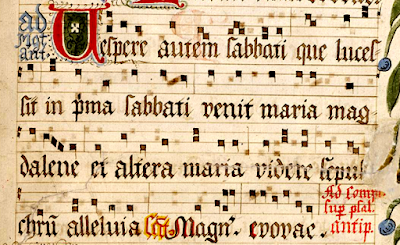 James MacMillan, Patron of the Latin Mass Society, has signed a joint letter on musical education in response to an article by Charlotte Gill wrote in the Guardian. Gill wrote:

For a creative subject, music has always been taught in a far too academic way, meaning that theoretical knowledge is the main route to advancement. While there are routes into musical careers for the untrained, and many pop, rap and grime artists have never studied music formally, there are also dozens of choirs and amateur collectives that put a huge focus on musical notation.

This is a cryptic, tricky language – rather like Latin – that can only be read by a small number of people, most of whom have benefited from private education. Children who do not have the resources, or ability, to comprehend it, are written off. Even when they are capable performers.

Gill is winding a good few issues up together here. We might agree with her criticism of the 'Grade' system of learning instruments, followed by many children, that it can make learning an instrument something of a grind. But a more important issue she has left out is the poor quality (or motivation) of many music (instrument) teachers. This is not be unrelated to their poor pay, and their poor treatment by many schools, where they have to eke out an existence on the fringes of the timetable and the school community, often working for several schools at once, resented by the teachers of other subjects for taking children out of their classes. It's a pretty bad system, all things considered. (Would anyone tolerate this for sports? For art? For Maths?)

When she points out that people who can't or simply haven't mastered musical notation have many opportunities to make music in contexts where this lack isn't a problem, it is hard to know what she is actually complaining about. The choirs who do need it, or at least find it vastly convenient, and the classical music world in general, are perfectly rational and within their rights to demand it.

The comparison with Latin is telling. Being able to read musical notation, or Latin, opens up to you a whole world of Western culture. Gill is right to deplore one result of the most recent educational reorganisation (the 'English Baccalaureate' focusing attention on core academic subjects), which is the narrowing of the opportunity to enter this world to children whose parents can afford private music tuition. We might say something similar about Latin's disappearance from state schools (though it is now coming back).

But Gill then makes the wholly illogical, Guardianisty inference that, despite having just said that the reason for the decline in musical literacy is a shift of resources, somehow the mere fact that it has become the preserve of an elite means that it is intellectually beyond the children of the less wealthy. As if this were not crazy enough, her next assertion is that, apparently for this reason, reading music shouldn't be taught as much as it is now. She seems to be angry with the elite who preserve this skill, though it certainly isn't its fault that music budgets have been cut, and out of anger with this elite she does not want ordinary children to join it.

It is important to understand Gill's position, because it is widely held in the progressive educational establishment. There is a sneaking idea that poor people are stupid, and a less hidden idea that highly skilled and cultured people are wicked. The first means that it would be impossible to give people from materially deprived backgrounds real intellectual skills or an appreciation of culture. The second means that it would not be desirable to do so. Grasp this mindset, and you grasp a lot of what has gone wrong with education since 1960.

Nothing more destructive, educationally, could be imagined. Applied to music, this attitude excludes children not only from a closer engagement with their culture, but the chance of making music a career, or a better one. John Lennon, one of the 20th century's most commercially successful musicians, lamented the poor musical education he had had, which made it harder for him to express his musical ideas as he wished to. At least there was no one at that time actively stopping him from learning about music, as Gill would apparently want to do today. Memo to the Guardian: ignorance is not liberating.

James MacMillan et al. (the letter has more than 600 signatories), has pointed out the patronising and oppressive absurdity of Gill's sequence of thoughts: let's not call it an argument.

Gill will at any rate be pleased to hear that the many Chant choirs singing at the Traditional Mass tend not to expect people to be able to read music: chant notation isn't the same as modern music anyway. With familiarity, the square notes can serve as an excellent aide-memoir to singers not able to sight-sing. But the educational point she is making is chilling: that the correct response to declining standards should be to drive them still lower, to exclude more and more people from the West's cultural patrimony.

Of course musical notation can be taught more widely, as could Latin: it is a matter of educational priorities. Unfortunately, before we can have a useful debate about timetable hours, we'd need to have at our disposal enough enthusiastic and skilled teachers to use those hours. Not only do we not have enough today, but on present trends we will have even fewer tomorrow.