Prayer for the Jews: what about Medieval anti-Semitism?

Certainly not in this case, because the Orationes sollemnes, of which the Prayer for the Jews is a part, derive not from the Middle Ages at all, but from Antiquity: probably the 3rd century, with links back to even earlier times. This is the scholarly consensus; the references are in the Position Paper. There is such a thing as Medieval anti-Semitism, and it is a phenomenon which got going in a big way in the 13th century. The Prayer for the Jews of the ancient liturgical tradition was composed a thousand years earlier. That really is rather a long gap.


Relations between Christians and Jews in the Roman Empire were not necessarily very chummy, but when we think of Medieval anti-Semitism there are a number of factors which, obviously, didn't apply in the earlier period. The whole business of European Jews being forced into banking, because there were not allowed to own land, and the subsequent resentment of their usury, for example. The effects of the Crusading movement, which focused attention on 'the infidel' and the betrayal of Christ, which set off anti-Jewish riots. The consequences of the Christian reconquest of Spain, and the problem of integrating large numbers of Muslims and Jews living there into a Christian state. And the theological development which had such bad consequences in the 13th century and later: the Talmud controversy.

Understanding the Talmud controversy gives an important insight into the relationship between the theological milieau of the Prayer for the Jews, and the theological milieu of Medieval anti-Semitism. Up to the time of the controversy there was a theological consensus based on St Paul and on the Fathers, which had three parts. First, the Jewish rejection of Christ was connected with the preaching of the Gospel to the Gentiles; they were destined to accept the Gospel as a corporate body in the last times. This is found in St Paul and numerous Fathers of the Church. Second, in the meantime the Jews gave witness to the truth, by preserving the Old Testament, which confirmed an important part of the Christian revelation. This is the position of St Augustine, and many others. Third, on a practical level they should be allowed to practice their religion in peace. This was the policy of St Gregory the Great, a policy reiterated in the bull of Pope Callixtus III, Sicut Iudeis, in 1120, which was reissued a number of times thereafter. This legislation attests to the difficulties the Jews were experiencing at the hands of Christians, but there was at least an official theological and legislative effort to oppose the persecution of the Jews.

Then the Talmud Controversy came along. This was the claim, made by a convert Jew, Nicholas Donin, that because they accepted the Talmud, Jews could not be considered as giving witness to the truth. This claim struck at the heart of the former consensus. Another claim of this era was that the Jews who sought Jesus' execution knew he was God, and so were guilty of Deicide, and their descendants with them.

I have neither the space nor the expertise to go into all the details of these controversies. It must suffice to say that that both claims were eventually shown - theologically - to be false, but a great deal of Jewish suffering took place in the meantime. It is during the time of the controvery that we find the most disturbing events, not (or not only) for their level of violence, but for the degree of official Church involvement. Anti-Semitic violence, against persons and property, ceased to be limited to the actions of a mindless mob. The great Orders of Friars were involved; so was the Papacy, as well as secular authorities.

The Postion Paper argues that what this dark period of the Church's history shows is not that there is a problem with what St Paul, the Fathers, and the earliest texts of the liturgy, have to say about the Jews, but that things went wrong when those things were rejected. It was the attack on the Patristic view of the Jews which justified the violence of the 13th and 14th centuries. It was the vindication of the Patristic position, by St Thomas Aquinas, by the Council of Trent, and in other ways, that eventually underpinned the re-establishment of a practical policy of toleration. 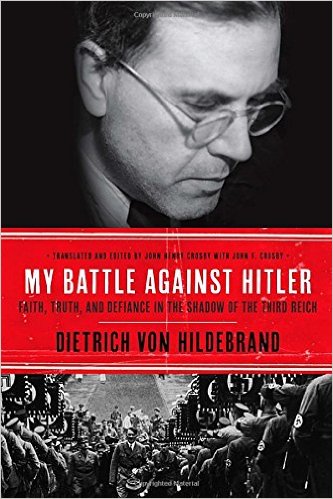 There is much which can be said about anti-Semitism in later centuries: about the attitude of Martin Luther, for example; about the conequences of the Enlightenment and the French Revolution; and the rise of nationalism and the Nazis. Catholic involvement in these movements is more complex. But it is obvious, at any rate that the Good Friday Liturgy doesn't reflect the views of, say, the obnoxious anti-Semite Voltaire, or the 'scientific racist' and modernist Renan, let alone the Nazis themselves. Catholics have multiple reasons for rejecting such thinkers, and for their part they are not exactly friendly towards the Church. Catholics did play a part in anti-Semitic movements - a recent article by Francis Philips discusses the role of lapsed Catholics in Hitler's inner circle. But Catholics were also involved prominently in the opposition to them. The 'White Rose' resistance to the Nazis in Munich was formed after Sophie Scholl distributed an anti-Nazi sermon of Cardinal von Galen.

As for the movement for the traditional Mass, Dietrich von Hildebrand and Eric de Savantham, two of the founding fathers of the lay movement, were prominent anti-Nazis. Hildebrand had to flee Germany, and then Austria, to escape the Nazis; de Savantham defected during the war.

The attempt to associate the Traditional Mass with extremist politics and anti-Semitism, like the attempt to associate it with clerical child-abuse (and here), says a lot about the ancient liturgy's opponents. To reiterate an earlier post in this series, the narrative here is not just about the Traditional Mass, but about the Church's whole past: and that includes the Church's teaching. The Church's teaching on sexuality is the real target; I don't think the liberals would care how we worshipped if there was not this important connection between the prestige of the ancient liturgy with the respect due to the Church's ancient teachings.

You can sign up for the annual symposium of the Roman Forum on Italy's Gardone Riviera here. The Roman Forum was founded by Dietrich von Hildebrand, and two places for students from England and Wales - now filled - are sponsored by the Latin Mass Society.

Support the work of the LMS by becoming an 'Anniversary Supporter'.
Posted by Joseph Shaw at 12:24 pm