The Oxford branch of the Guild of St Clare held a Vestment mending session on Saturday, an example of the kind of work which they can do to support the liturgy.


There were a number of vestments from the Norbertine Priory in Chelmsford, and an altar frontal from SS Gregory & Augustine in Oxford. The vestments are not of especially high value: it would not be worth spending vast sums on professional restorers. But they need careful attention by people with a variety of skills and an understanding of how vestments work, and are used, if these very decent vestments are to return to use.

For example, one green Low Mass set's lining was completely worn out, and was replaced. In another case, a high-quality, silk lining fabric was intact but worn out at the edge, so it has been edged with another, appropriate material, at minimal cost in materials. 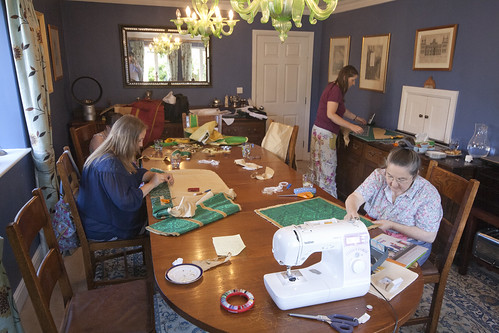 The ladies of the Guild were able to combine their experience and skills on Saturday afternoon to made a big inroad to the pile of worn out vestments which Fr Stephen Morrison OPraem found in the Chelmsford sacristy, as a taster of the kind of work for which the Guild was established. The Guild charges for the cost of fabric and a small amount per hour, to subsidise members' training.

The Guild is affiliated to the Latin Mass Society.

Support the work of the LMS by becoming an 'Anniversary Supporter'.
Posted by Joseph Shaw at 1:17 pm