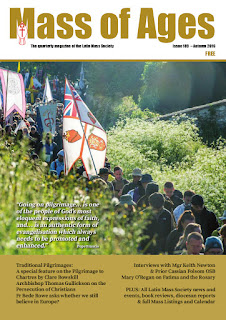 The autumn 2016 edition is now available in which we publish part of the talk given to the AGM by Archbishop Thomas Gullickson, Apostolic Nuncio to Switzerland and Lichtenstein. Speaking on the subject ‘The persecution of the Church’, Archbishop Gullickson said:

“The refusal to admit suffering from persecution as a part of the Christian life is not so much a question of our struggle with the problem of evil (why must the innocent suffer?) as it is of properly attributing the ongoing suffering of the just to Satan’s wrath and to the presence in our midst of not few people unwilling to renounce the father of evil and his works and pomps. Why are there martyrs today? Why are Christians persecuted today? Because the ‘Beast’ is on the loose. The Church, the Body of Christ is lacerated yet today by those who serve the Father of Lies and the Prince of Darkness, by those who prefer darkness to light. To this mix, as it has to do with denial in the hearts and minds of fellow Christians, just add a heaping spoonful of ambiguity and will to obfuscate, then stir in stupidity and faithlessness, and you have a better idea as to why our insistent prayer should be that the Lord come quickly.”

Also in the new edition:

Interview with the Rt Rev Mgr Keith Newton, Ordinary of the Personal Ordinariate of Our Lady of Walsingham,

Daniel Blackman on the role of photography

Interview with Prior Cassian Folsom OSB,

Caroline Shaw on Our Lady of the Seven Sorrows, as depicted by the 16th century artist, Adriaen Isenbrant.

Regular columnist the ‘Lone Veiler’ writes on Relics of the Saints

Anthony Hofler on ‘The Scourge of Indifferentism.”

Edward Kendall, a Philosophy and Religion student at Bangor, reveals how his first experience of Mass in the Extraordinary Form has made him a committed follower.

Mass of Ages is already with members of the Latin Mass Society; it will be in select churches this weekend, and can be read online HERE.

Support the work of the LMS by becoming an 'Anniversary Supporter'.
Posted by Joseph Shaw at 6:36 pm