Why they hate us 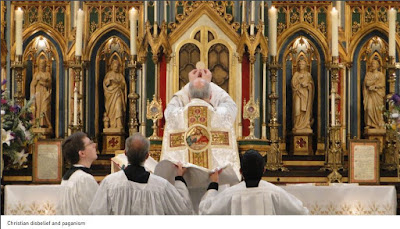 This has already done the rounds in the media, but I'd not seen one particular aspect pointed up. The slick propaganda magazine of the Islamic State (ISIS), Dabiq, has a chilling article entitled 'Why we hate you and why we fight you'. You can see this hideous publication here; the article starts on p30. They hate us, they say, for three reasons: for our Christianity, for our liberal secularism, and for Western foreign policy. They emphasise the point that the last issue is not the primary one.

It reminds me a story I heard a few years about about the late, lamented magazine The Sower, of the Maryvale Institute. They had an article about the Mass which they wanted illustrated with appropriate photos. The non-believing designer did a search for photos and most of them turned out to be of the Traditional Mass. He just thought they looked nice. This didn't help The Sower which was gaining a reputation for being a bit too orthodox.

What does it tell us, that non-believers, whether sympathetic or ferociously unsympathetic, pick out the Traditional Mass as illustrative of Catholic liturgy, or even of Christianity as a whole? The Mass in its traditional form looks the part. It looks like worship. It corresponds to their vague and perhaps confused notions of what Christian worship is. When an atheist or a Muslim extremist thinks of Christianity, this is a prominent mental image.

It means that if we can explain what is going on in this picture, we are addressing the heart of their idea of our religion. In clearing away misunderstandings and perhaps hatred of this, we will be cultivating a plant already rooted in their minds.

That really is something worth considering.

Support the work of the LMS by becoming an 'Anniversary Supporter'.
Posted by Joseph Shaw at 12:18 pm