Some years I recall a fellow Oxford academic speculating about why Christianity and Islam, among world religions, were the ones used to justify the persecution of religious dissent. Perhaps, he suggested, it was because they were absolutist religions: they claimed an exclusive possession of the truth. 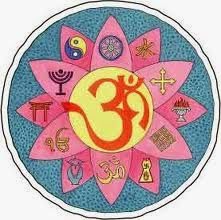 It wasn't clear how he imagined Hinduism and Buddhism worked; I fancy he was as ignorant about them as I was, and am. But it must have been a long time ago, because this conversation clearly predated the emergence, at least into the Western media, of militant Hinduism in India, and the persecution of Christians and Muslims by militant Buddhists in Sri Lanka and Burma.

So, so much for that idea. But the idea of religious absolutism has been wheeled out again in the wake of the Charlie Hebdo attacks. Some forms of some religions are incompatible with Western democracies, we hear, but most are fine, and the difference can be expressed by the idea of religious absolutism. Absolutist religions: bad. Non-absolutist religions: good, or, at least, ok.


It's not very clear what absolutism means, but I'll give two options a try. One is to do with conceptions of religious truth. It is sometimes said that Hinduism regards all religions as paths to the same end, and in that sense true. This idea pops up in books about Yoga - usually towards the end... If you can see how all religions are really one, then you really have mastered meditation, because the idea is incoherent. The view 'all religions are one' is itself a religious claim, and one that very few people accept. It is something the great world religions have in common, but only as something they all reject. Here is one religious view, incompatible with its rivals: so what? It tells us nothing about the other religions, and it isn't a view which is particularly suited to dealing with the other religions on a practical level, since it is incompatible with them.

The same is true of more modest claims. Something politicians are likely to say might be: 'All [or most] religions help their believers to live moral and spiritually rewarding lives, to a roughly equal extent'. (The last bit may just be implied, and left unsaid.) This is the kind of thing someone would say who rejects, or has simply forgotten, the idea that a religion's concrete teaching makes a difference. Since serious-minded members of the different religions think that their concrete teachings do make a difference, this isn't something any of them can accept. But more fundamentally, it is itself a theological claim, which must submit to inquiry just like all the other theological claims. Has it been revealed by some deity? Can it be deduced philosophically? Is it the conclusion of anthropological research? I think most of the people who say something like this do so for no better reason than that it sounds nice and feels right.

People who make that kind of claim like to feel terribly superior to ordinary religious believers, and imagine themselves looking down on the different religions from an Olympian height. But they aren't. They are just another group of people making theological claims, though in their case they have neither numbers, nor a long historical tradition, nor profound philosophical thinking, to back them up. And what is more, their claim is just as 'absolutist' as any other religious claim you care to mention, such as that none come to the Father except through the Son, or that Allah is God and Mohammed is His Prophet. The claim that the truth of the teachings of the world religions is unimportant is simply a denial of claims that most of them make. This eccentric religious idea is as incompatible with the great religions as they are with each other: indeed, more so, since it would seem that there is less overlap of attitude or theological principle between this liberal religious conception and the major religions, than they share amongst themselves.

A liberal interlocutor might at this point want to slide into the next of the two interpretations of the phrase 'religious absolutism'. The fact is, he might say, some versions of some religions are tolerant and some are not: that's what we mean, and that's what is important for practical politics. The Western democracies must find a way to suppress versions of Islam, and indeed any other religion, which say that non-believers must be put to the sword, since obviously groups of people with that view are not going to integrate well into a multi-cultural society.

That might seem fair enough, but there is something which the liberals are still trying not to admit. This is that their attitude to these radical religious groups is based on theological principles. They are not being neutral between religions, they are not rising above the religious debate, they are getting stuck right in with a substantive theological view, which they don't want to make explicit because they don't want to be obliged to give it any theological justification. What is it? It is the claim that the radicals are wrong. If the radicals are making a theological claim about an obligation to slay blasphemers (or whatever it might be), the denial of this claim is itself, just as much, a theological claim.

In short, the liberal political response is a matter of theological principle. And you know what? It is an intolerant one. They aren't going to tolerate radical Islam, for example, or the Hindus who terrorise dalit converts to Christianity, or the Buddhists who burn down churches.

The liberals are, of course, correct: there is no genuine obligation to slay people who draw pictures of Mohammed, nor is there any genuine theological justification for stopping dalits being baptised or for burning down churches. I believe these things, however, because I can appeal to a highly articulated theological system from which these facts follow. The liberals have nothing much to appeal to; they aren't, for example, all atheists, and those who are have no intellectual justification for their atheism (because there is none).

The response of the Western political elite to the rise of religious extremism has been to insist more than ever on the importance of the system they have created: a seething cauldron of religious pluralism, under the lid of liberal political institutions backed by armed police. With varying degrees of self-consciousness, they and their predecessors welcomed and facilitated the emergence this system, to destroy the political relevance of Christianity: to reduce it to being just one religion among many. But it is only Christianity which can give a coherent answer to the question: Why should we forbid female circumcision, child prostitution, and a terroristic response to depictions of Mohammed, while tolerating most other manifestations of religious belief?