Is Brendan O'Neil a snowflake? 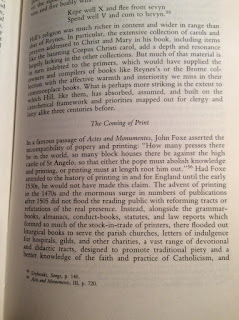 I'm reposting this from Facebook, with a little extra commentary.


Is Brendan O'Neill a snowflake? I challenged his Dan Brown version of history and got my comment deleted from his post. Funny thing is that he believes in an almost absolute freedom of expression, and I don't at all. I just think what you want to censor tells everyone else something about you.
He wrote:
The response of the old media to its waning influence over public thinking, and its displacement by new sources of information and internet chatter, has been extraordinary. Following Brexit and Trump they've behaved like those monks who raged against the invention of the printing press because they feared -- rightly, as it turned out -- that it would overturn their dominion over truth. Fifteenth-century monks feared the spread of heresy thanks to printing; now we fear the spread of fake news thanks to Facebook.
Sure, there's a lot of bullshit on the internet. I see it everyday. But so what? I still feel about the web what John Foxe felt about the printing press:
"[W]ith printing, writing, and reading, convince darkness by light, error by truth, ignorance by learning... [and] hereby tongues are known, knowledge groweth, judgment increaseth, books are dispersed, the Scripture is seen, the doctors be read, stories be opened, times compared, truth discerned, falsehood detected, with finger pointed, and all, as I said, through the benefit of printing."
-----------
This is 'John Foxe' as in the notorious Protestant propagandist, author of the Book of Martyrs, who hastily re-invented the idea of post-Biblical saints (after the real ones had been expunged from popular devotions by the Reformers), in order to score points off 'Bloody' Mary. Yes, the book was called by 'Foxe's Book of Liars' by Cobbet, who ought to be a hero to people like O'Neil but perhaps he was off school when they covered him.
I asked him if he had any sources for his claims about '15th century monks' and was told 'Jesus wept. Read some history', so I posted a photo of p77 of Eamonn Duffy's Stripping of the Altars, which begins Duffy's magisterial demolition of the hoary old chestnut that printing was more useful to the radicals than to the religious conservatives. How does O'Neil respond to reasoned argument? He hits the delete key.
It was Catholics who had the secret printing presses and the samizdat bookshops in England in the Reformation period. That doesn't fit the establishment's official historical narrative. I don't think O'Neil sees himself as an establishment shill. If he has swallowed that, it can only be through ignorance. Perhaps he should take his own advice and read some history.

Thus far FB. For my temerity in noting these events, I have now been blocked and unfriended by O'Neil.

The alliance between Catholics and libertarians is always strictly tactical, not strategic, as I've pointed out a few times on this blog. What is interesting is that O'Neil has behaved in exactly the way that what he calls the 'snowflakes' of the left have behaved, for which he has been lambasting them for years. They proclaim their openness to ideas, they talk about free speech, but when challended by actual, scholarly, arguments about something they hold dear, they throw their toys out of the pram.

Clearly, the idea that '15th century monks' were evil and oppressive is just too close to his heart for O'Neil to brook dissent. The funniest thing, really, is the idea that 15th century monks, or indeed monks of any century, somehow had a 'dominion over truth'. This is Dan Brown merging into Philip Pullman, on speed. Long before the 15th century there was a brisk non-monastic, commercial book-copying industry in London and the University towns. The monks were important in preserving classical learning in the early Middle Ages, but a funny kind of 'dominion over truth' that was: copying books they didn't agree with being more or less the opposite of Brenden O'Neil's social media policy.

For the record, I believe in censorship of pornography, blasphemy, and profanity, as far as my twitter feed goes, which is about the only thing I have any control over outside my own home, and I unfollow people who tweet those things into my timeline. Everyone is free to draw what conclusions they like about me from that.

Support the work of the LMS by becoming an 'Anniversary Supporter'.
Posted by Joseph Shaw at 10:56 am