Bullying and ostracism from the Catholic Education Service 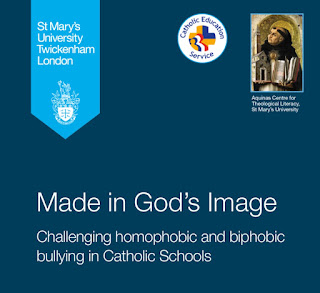 Update: as well as Mark Lambert, CCFather has written three posts about this which are worth reading.

Something which has emerged is that much of this document is cut and pasted from materials created by Stonewall, the charming gay advocacy group which gave Cardinal O'Brian its annual 'Bigot of the Year' award for opposing same-sex marriage, and a group called 'lgbtScotland'.

Copies of a guidance document entitled 'Made in God's Image', on homophobic bullying, from the Catholic Education Service are doing the rounds. It is going to be sent to Catholic schools soon but Mark Lambert has put the pdf on DropBox and made a few comments.

The document has both superficial and deep problems. Superficially, I'm suspicious of documents which don't include the names of the people who drew them up, or indeed the name of anyone willing to take responsibility for it. This document has the logos of the CES, St Mary's University, and the Aquinas Centre for Theological Literacy on it. Is it actually endorsed by these institutions? (Did St Mary's ask its governing body to vote on it? I hardly think so.) Where does it come from? Who paid for it? Who composed it? No matter, the CES is promoting it, maybe that is all we need to know.

Again, this is a 37-page document on homophobic bullying, which sets out lesson plans for eight 50-minute lessons to be devoted exclusively to this topic. What about other forms of bullying? What about other forms of bullying which target 'protected characteristics' under English law? No doubt the CES has policies on all these things but there is no sense of an integrated approach here. How does this fit in with Sex Ed, Religious Studies, or anything else? It is not even clear what teachers are supposed to deliver these lessons, which make frequent reference to gospel passages, but stray into history, current affairs, and Sex Ed. In some places the reader gets the impression that it would be PE teachers who are most relevant to the issues raised.

But again, maybe that's not so important. After all, I've no doubt homophobic bullying is perfectly real, and needs to be addressed in our schools. Here is a document which aims to do that. So how does it set about it?

'Homophobic bullying is bullying that is based on prejudice or negative attitudes, beliefs or views about lesbian, gay or bi people.' (p3)

Homophobia is the fear, dislike or hatred of gay people. Bullying involves excluding, humiliating or threatening people. Therefore homophobic bullying is when someone is excluded, humiliated or
threatened because they are (or people think they are) gay.

A US government website on bullying gives us a more complete definition of bullying:

It is worth noticing, then, from the start, that 'Made in God's Image' proposes a notion of bullying which puts excluding in the first place, as opposed to unwanted behaviour, and ignores the question of power imbalance. According to 'Made in God's Image', when someone weak wishes to dissociate himself from a person or group which is strong, the weak person is bullying the strong one. Let me say that again. When a weak and isolated child tells the in-group gang to go away, no he won't join them, he is bullying them. This has pretty alarming implications.

Now, according to 'Made in God's Image', what teachers and children should be doing instead of bullying is, naturally, 'accepting' each other and not 'judging' each other (p5). But there are limits. Those guilty of homophobic language and attitudes should not be accepted: instead, they should be, as the document puts it, 'challenged'. This might seem fair enough, if they are bullies, but actually the document does a little sleight of hand here.

It is not bullies who the document tells us need to be challenged, it is people who exhibit homophobic attitudes and use homophobic language.

Thus, it gives as an example of 'homophobic language', 'casual' remarks between children such as ‘that’s so gay’, or ‘you’re so gay’; ‘those trainers are so gay’. As anyone who has had five minutes' conversation with school-age children in a normal school will know, such remarks are not necessarily or indeed predominantly part of 'excluding, threatening, or humiliating people', let alone of 'unwanted, aggressive behaviour ... that involves a real or perceived power imbalance.' It is commonly banter between friends with zero implications about the sexuality of anyone. It may be very regrettable that the word 'gay' has negative connotations, but if we are 'challenging' a child who uses it in this way to a friend we are not, by that fact, challenging an example of homophobic bullying. No bullying was taking place.

The same is true of a later example. A father watching TV with his daughter remarks (p22):

‘These gays are all over the TV nowadays. It’s like they’re taking over. I’ve got no problem with them, but they don’t have to shove it in my face.’

Who is this man supposed to be bullying? The celebs on the telly? Obviously not.

Although the document gives examples of bullying as well, it is not bullying which is the real target here. Nor, in fact, is homophobia. The child who says 'those trainers are so gay' is not, necessarily, a homophobe: such a remark does not suggest, much less prove, that he or she has a fear or dislike of gay people. As noted, this use of language is, like the use of profanities, regrettable, but what is even more regrettable is the judging and labelling of children, to be followed by their exclusion, humiliation, and threatening, on the basis of their careless use of language.

The attitude of the father in the later example is not clear, because we don't actually know if he is using the word 'gay' to denote orientation, lifestyle choice, or cultural and political advocacy. The very fact that he knows a media personality is 'gay' suggests that it is not just a matter of orientation. Celebs 'come out as gay', generally speaking, as a cultural and political gesture. However, the case is clearer in another example in the document (p26).

She sighs and says that Andrew is old enough to know now: Uncle Michael is gay and has been living with his boyfriend for the last five years. His mum is looking really upset. ‘That sort of thing isn’t right, Andrew, and I’m not having it – living with a man, for God’s sake! I wouldn’t be exposing you to that nonsense. He knows the family doesn’t approve of him and he just goes right ahead and does it anyway.’
Andrew is surprised, and even more confused. ‘So that’s why you don’t like him anymore? Just because he’s gay? Why?’
‘It’s wrong, Andrew. Now just leave it, will you?’

Here we have a clear example, and presumably it is supposed to be a clear example, of an attitude towards someone based on transgressive public behaviour. Uncle Michael has adopted a lifestyle at odds with the moral law, and Andrew's mother does not want her son to be exposed to this behaviour. This is given as an example of homophobia.

The authors of 'Made in God's Image' are playing a dangerous, if familiar, game. Fear and hatred of 'gays' is wrong, they say, and few indeed would disagree. The Church's teaching on sexuality can still be taught in Catholic schools, they say: and isn't that nice? But when it comes down to it, being influenced by that teaching just is homophobic. To distance oneself from wrongful public behaviour cannot, we are told, be separated from the idea of fearing and hating a whole category of people, on the basis that some of the people in this category might on occasion behave wrongly.

On the same argument, if Uncle Michael was a remarried divorcee having a string of affairs, then any objection by Andrew's 'mum' to going round to see him with her children would count as heterophobia. Somehow the authors of this document would deny that this conclusion follows. It doesn't make sense. It doesn't have to make sense. This is gaslighting.

The classroom discussions proposed by the 'Made in God's Image' (p22), are, for people eschewing all judgmentalism and accepting everyone as they are, extraordinarily manipulative. Having started from the assumption that homophobia is deeply bad, pupils are invited to discuss in small groups a series of possibly-homophobic scenarios. This set-up is bound to push the pupils to taking the widest possible view of homophobia. Who wants to be the one to say: 'I don't think this case is homophobic', thereby providing evidence that they are themselves homophobic? What a gift to the classroom bully, whether child or teacher, any such evidence would be.

This document is not about combating bullying. It uses the real suffering of one set of bullying victims to justify using the extremely one-sided power relations between managers and teachers, and between teachers and pupils, to indulge in a bit of bullying of its own. It claims to be against judging people, but it advocates taking a child's most careless word as evidence of moral failings. It claims to be about 'accepting' people in accordance with the teaching of the Church, but there is no acceptance of people who take seriously Catholic teaching on sexuality.

In pursuit of this agenda, the message of the Gospel is bent completely out of shape. 'Made in God's Image' tells us (p.18) that Jesus refused to judge people and told us not to judge anyone. Nowhere can it be admitted that Jesus condemned the lake-side towns, Jerusalem, or the Pharisees, for their failings; that he said 'For the Father judgeth no man, but hath committed all judgment unto the Son' (John 5:22), nor yet that that he passed on this right and duty to judge to the Apostles, who would 'sit on thrones and judge the twelve tribes of Israel' (Luke 22:30); nor, indeed, that he said that sexual sins 'defile a man' (Mat 15:19), and exclude people from heaven.

The characterisation of the Pharisees themselves is grossly historically biased, and the references to ancient and modern Jewish practice (p17) could be construed as anti-semitic.

Nor can it be admitted clearly that Christ's reaction to the 'sinner' who washed his feet with her tears was connected with her repentance of her sins. Instead, the children are invited 'meditate' on a version of the story in which this inconvenient word is not used, using techniques familiar to practioners of yoga and hypnosis (p19):

Close your eyes, relax your shoulders, take a moment to notice sounds around you and let them go. Breathe out any tension in your body and when you are ready, allow yourself to gently enter the scene from the story, ...

I think Catholic parents at this point are entitled to ask the Catholic educational establishment: who gave you the right to manipulate my children and turn them against the moral guidance of their parents?