SSPX ordinations: with permission from the Holy See 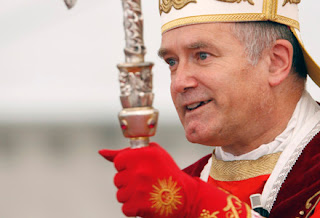 Update: there's an amusing exchange in Fr Z's comment box on this. Fr Z quotes Archbishop Pozzo of the PCED that SSPX priestly ordinations are something they 'permit and tolerate' but which are still regarded as 'valid but illicit'. But, really, that doesn't make sense. If they are permitted, they are licit. The word 'licit' simply means 'permitted': any dictionary will tell you that.

Of course these are crazy times. And anyway I'm happy if Rome wants to make some concession now ('permit and tolerate') while allowing itself to make another, at least on paper ('make licit') at some future date. It is all part of a process, after all.

This is really wonderful news: Bishop Fellay, Superior of the Society of St Pius X, has said (h/t Rorate Caeli) that he recieved a letter from the Holy See last year telling him that he could continue with priestly ordinations, without needing permission from the local bishop. This is a move I noted as a possible 'next step' after those involving confession and marriages in my 'Chairman's Message' in the latest Mass of Ages, which I reproduce below.

Not for the first time in the present pontificate, the Catholic media is abuzz with the possibility that the Society of Pope Pius X (SSPX) will be ‘reconciled’ to the Holy See: which is to say, that it would gain official canonical status. On a previous occasion, when asked for comments by Catholic journalists, I told them to calm down: my view was that it wasn’t about to happen, because of the issue of mutual trust. I was correct, then, but things have continued to develop. The ‘jurisdiction’ needed for priests to hear confessions validly, outside an emergency situation, was granted to the SSPX for the ‘Year of Mercy’, and when that year came to an end this jurisdiction was granted permanently. Now provisions have been made in relation to weddings celebrated by SSPX priests, so that there need not be any doubt about their validity either. These arrangements give the SSPX privileges, such as jurisdiction to hear confessions given directly from the Pope, enjoyed by no other religious institute.

We appear to be witnessing a gradual process of regularisation. The next step, I suppose, might be for the Holy See to give formal permission for priestly ordinations. Alternatively, the gradual process could give way to a once-and-for-all agreement with special provisions for the SSPX’s apostolates, perhaps including a ‘Personal Prelature’, which would mean that SSPX priests would be answerable not to local bishops but a bishop (or Cardinal) of their own.

Time will tell. The attitude of the Holy See to the ‘Patriotic Church’ in China offers a partial parallel. The Patriotic Catholic Association, which is a department of the Chinese state, looks, on paper, like a clear-cut case of schism, complete with an ‘underground’ counterpart in communion with Rome. Rome’s policy of many decades, however, has been not to isolate and oppose the Patriotic Church, but as far as possible to erode the distinction between it and the Universal Church. When asked, Rome gives permission for its bishops’ consecrations, to prevent them falling automatically into excommunication. Other Patriotic bishops have been reconciled to Rome afterwards, without ceasing to exercise their ministry within the Patriotic institution. Some of these have done so in secret. The Faithful are told they can attend either Patriotic or underground services, and do both. The idea is to prevent the schism, which has little, if any, doctrinal basis, hardening into something which cannot be undone, when, as may happen, state policy changes.

As far as the SSPX is concerned, we should rejoice at the solicitude the Holy Father has shown the Faithful who receive the sacraments from them, and for the prospect, however uncertain, of an official settlement of the SSPX’s canonical situation. We should above all pray for all the parties involved.