New book on the Third Secret of Fatima 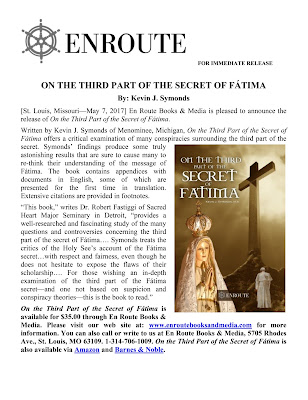 Kevin Symonds, whose book on the composition of the Prayer to St Michael I recommended on this blog back in 2015, has written another careful, thorough, and sober study of a subject surrounded by conjecture: the 'Third Secret' of Fatima.

I've provided a publicity-blurb for it as follows:

Symonds has done a very thorough job in getting to the bottom–insofar as it is possible–of the various confusions and conspiracy theories on the subject of the Third Secret, making a compelling case that what the Vatican published in 2000 was the whole text of it as written by Sr Lucia. No doubt the debate will continue, but the clarity and intellectual honesty of Symonds’ work, with copious reference to the relevant sources in their original languages, will be of enormous assistance for scholars in the future who wish to understand this tangled affair. –Dr. Joseph Shaw

I hope my regular readers won't be put off the book by the fact that, after exhaustive investigation of how each claim has come to be made and how the evidence stacks up, Symonds concludes that the various conspiracy theories to the effect that the Third Secret was not really revealed by the Vatican when the vision of the martyrdom of the 'bishop dressed in white' was finally published, fail: that is, that the Vatican really did publish everything they had.

I have read various things in support of these theories which, at the time, I found convincing, but Symonds shows, with painstaking detail, that there is less to these than meets the eye. Whatever you may want to believe, this book really must be taken into consideration.

He doesn't address the question of whether the Consecration of Russia has been done.

All the stuff about the alleged length and physical shape and alarming contents of the letter sent by Sr Lucia with the secret in it are considered, and it gets rather complicated. There is a larger and more earthy question, however, which used to worry me: if the secret was as un-explosive as the Vatican revealed it to be, why was it not published earlier? Symonds gives the following answer. Since the vision of the 'bishop dressed in white' appears to be a prophecy of the assassination of a pope, to have published it much earlier would have been for the Vatican to say, in effect, that they expected such an event to take place. It would have been like putting a target on the Pope's back: a challenge to every nutcase and hostile government on the planet to kill the Holy Father. Only insofar as they were able to say that, with hindsight, the vision was about the attempted assassination of Pope John Paul II in 1981, and more especially after the fall of Communism, could it be published without this kind of worry.