New book about the Prayer to St Michael 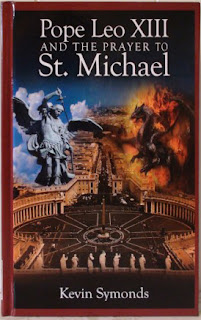 The Prayer to St Michael, which forms part of the traditional Prayers After Low Mass, is one of the most widely known and popular Catholic prayers of modern composition. Its author was Pope Leo XIII, and its composition is associated with a story, told in a number of versions, of Pope Leo having a vision in which Satan asked for, and was granted, power over the Church for a certain time, as he was given over Job, in Job 1:12:

Then the Lord said to Satan: Behold, all that he hath is in thy hand.

It is easy to dismiss such stories, but the composition of the prayer does need explanation. Pope Leo inherited the idea of the Prayers After Low Mass, which had been ordered to be said in the Papal States for their protection against attack, by Pope Pius IX, but it was Leo who made them universal, and added the Prayer to St Michael. Why did he want Catholics all over the world to recite this heartfelt plea for the protection of the Church from satanic attack?

This new book is an excellent treatment of the subject; it brings all the threads together, including the historical context, with reference to a mass of relevant documents quoted in full. It is thorough, it is sober, and it takes the supernatural seriously: without either sensationalism or cynicism. I thoroughly recommend it to any Catholic wanting to get to the bottom the matter.


From the Foreword, by Bishop Athanasius Schneider.
In his book "Pope Leo XIII and the Prayer to St. Michael," Mr. Kevin Symonds presents a very careful and competent historical research about the origin and the circumstances of the publication of the prayer to St. Michael and the above mentioned exorcism formula. Furthermore he gives also a rich spiritual reflection on the Divine truth about the Holy Angels, the fallen angels and the reality and necessity of the spiritual battle. Mr. Symonds’ book is indeed very relevant for our times. May this book become widespread and raise to many Catholics— especially the clergy—a new awareness of the necessity to use the spiritual means which God and His Church have given us in order to fight against the infiltration and attacks of the evil spirits. Such well-proven spiritual means are the prayer to St. Michael and the general exorcism against Satan and his machinations. It would be very helpful to start a worldwide petition that the Holy See may prescribe again the recitation of the prayer to St. Michael after the Holy Mass in all Catholic churches. Furthermore, all priests and bishops should be encouraged to recite often the general exorcism against Satan according to the formula of Pope Leo XIII.

Related to this topics is the FIUV Position Paper on Prayers for Persecuted Christians and the Leonine Prayers, which has been corrected in light of Mr Symonds' research, available here.